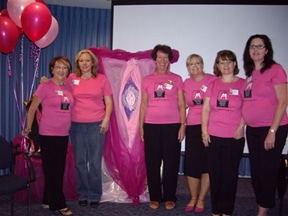 My experience of Kath is that she is a tireless sex/gyn awareness educator, who following radical gyn surgery to remove her cancer, has given the past 15 years to helping women to be better informed.

She founded GAIN (Gynaecological Awareness Information Network), which helps to raise the awareness of women and to provide them with quality information, as well as providing a solid campaigning platform for lobbying the government.

In Australia, Kath represents the community on heads of government councils and has been successful in lobbying the government for funding for gyn cancer research.  She is also the inspirational visionary behind the International Gynaecological Awareness Day on 10 Sept, which is starting to be celebrated in many countries.

In my personal contact with Kath, and I have helped her with her campaign, I have been so impressed and inspired by her dogged determination, despite horrendous difficulties, to get the message out to women so that they can have a better quality of life.

Kath is approaching retirement age and I would love to see the community recognize and honour her for all of the many hours of tireless campaigning she has done for very little fiscal reward.

Kath has only recently started her public speaking business, Speaking Openly, in an effort to take the message further into the corporate arena.  I would love to see her win this award to help her further her campaign.