I want to nominate a special woman, Marlies Bosch, she was born in Amsterdam in 1942. Marlies Bosch has really made a difference for Dutch women, Tibetan Buddhist nuns and various healthcare issues. She did so much I can hardly tell, but below is an excerpt from her website.

“At the moment she is the chairwoman of the Foundation ICG (Information Centre Gynaecology), which organization she has helped to found in the beginning of the eighties in order to prevent unnecessary hysterectomies and to raise awareness of the impact of such surgeries on women’s lives. It now still provides support and information for women with gynaecological problems in Holland.”

“She photographed and documented her own process of hysterectomy and also made a photo book of her process with breast cancer, in that way helping women openly speaking about it.

“She also founded and is the secretary of the DFLN, Dutch foundation for Ladakhi Nuns, and as such initiated the adaptation of Ourbodies, Ourselves in Tibetan. With the support of this foundation Ladakhi nuns manage to become self-supportive.”

She is also a journalist and photographer who writes frequently about women and health issues for a series of magazines and newspapers. I hope to have given a bit of an impression of this woman. 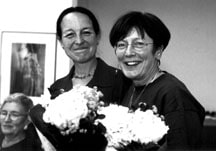 Ms. Bosch is pictured to the right.