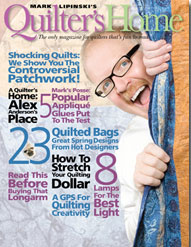 Here’s a story I meant to mention last week — the Washington Post covers the steamy side of quilting.

Yep. The March/April issue of Quilter’s Home magazine is wrapped up in plastic like Playboy and JoAnn Fabric and Crafts has refused to sell it.

So what’s inside? Monica Hesse has the goods:

Some of the images are disturbing — and moving — like quilter Gwen Magee’s “Southern Heritage/Southern Shame,” which depicts five lynching victims hanging in front of a Confederate flag.

Others are whimsical. Consider “Helping Hands,” a Charlottesville quilter’s ode to Viagra. The work was inspired by a present from a friend: “A fat quarter of fabrics with all these itty-bitty penises and sperm,” says Mary Beth Bellah, describing the pile of remnants with delight.

The finished product is asymmetrical and somewhat abstract: dozens of little blue pills spiraling out from a central hand. It’s nothing like what you could buy in Amish country, although it does seem appropriate as a wedding quilt. Bellah considers herself an artist and has displayed her quilts in private shows. At a recent show in a hospital, “Helping Hands” ended up stashed in a closet after a few complaints.

Of course quilting had always been tied with social and political history. Rarely, though, do we hear of quilters making waves.

I appreciated the quotes featured at the end. While these works would hardly be considered “daring” if created using another artistic medium, in the world of quilting, they’re unsettling, and the quilters know their potential impact:

Magee says that the contrast between her soft fabrics and her harsh social messages is exactly what makes her work effective. She did see a letter from one guy protesting her quilts, asking, “Who would want to cuddle under such a thing?” “He had no concept that this wasn’t that kind of quilt,” Magee says.

You can see a close-up of  “Helping Hands,” the ode to Viagra, at Mary Beth Bellah’s website, where she writes: “I personally think the topic is ideal for a hospital setting and someday hope it finds a permanent home in an ED specialist’s office or clinic.”