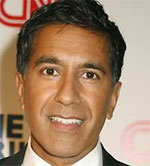 CNN just announced that Sanjay Gupta, CNN’s chief medical correspondent, has decided he’d rather stay on the media side than join the Obama administration as surgeon general.

Gupta was considered a front-runner for the position, and his interest prompted discussion about his qualifications and views, as well as talk about whether a doctor best known for his TV work would make an effective surgeon general. Rachel weighed in here with some concerns.

FoxNews quotes the director of the group representing Gupta’s would-be health team saying that Gupta is “no longer in contention.” The pay cut may have been a contributing factor. The position pays about $153,000 — a lot less than what Gupta is making at CNN.

“No one has yet been nominated or confirmed for the surgeon general position, and we’ve heard nothing,” said Jennifer Buschick, a spokeswoman with the Office of the Surgeon General.