Last night, the War on Women suffered a setback — due largely to women voters who used the ballot to re-elect President Barack Obama and to push back against absurd, insulting and just plain offensive comments about rape and women’s bodies.

Two of the biggest losers last night were the gentlemen who claimed that women have magic wombs that stop pregnancy from occurring during legitimate rape and if it does happen, it was a gift from God. The magic was in our votes, ladies. We’ve had it all along.

Erin Gloria Ryan’s post at Jezebel is succinctly titled “Team Rape Lost Big Last Night.” Read it for a complete look at races around the country.

John Koster was defeated by Suzan DelBene in Washington state — Koster famously referred to “the rape thing” and confused one woman’s choice with controlling all women’s choices: “I know a woman who was raped and kept the child, gave it up for adoption and doesn’t regret it.”

And in Illinois, Rep. Joe Walsh, who doesn’t believe abortion is ever necessary to save the life or health of a mother, lost to challenger Tammy Duckworth, an Iraq War veteran who lost both legs in combat.

For more analysis, Bryce Covert at The Nation examines the impact of politicians’ misogyny on the election outcomes, and concludes: “Score one for women’s rights, zero for attempts to control their bodies.”

Our Bodies, Our Votes …

hey @RepToddAkin, now maybe you’ll finally have time to get crackin at all those books @oboshealth and @TheLadydrawers dropped off!

We heartily second that recommendation.

Following the defeat of Indiana Senate candidate Richard Mourdock — who recently said, “I think even when life begins in that horrible situation of rape, that it is something that God intended to happen” — Jason Lefkowitz tweeted: “And in Indiana, Mourdock has officially been buried under a massive pile of hardback copies of ‘Our Bodies, Ourselves.'”

No need; with the public’s help, we’ll deliver the book to each and every member of Congress (41 days left to make this happen!). 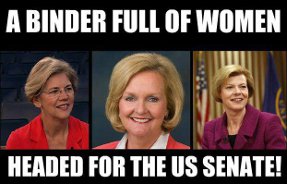 We now have a record number of women in Senate, with 20 women Senators elected.

Another big success last night was the passage of ballot measures in Maine and Maryland approving same-sex marriage, the first time it has been made legal through a popular vote. An amendment to ban same-sex marriage was defeated in Minnesota.

We’re still waiting to hear for sure about Washington state, but early returns are promising. Same-sex marriage is now legal in eight states as well as in Washington, D.C.

More good news: Iowa Supreme Court Justice David Wiggins is staying on the bench — he had been targeted for removal because of his role in the legalization of gay marriage in that state.

Abortion-related measures were considered in two states. In Florida, voters defeated Amendment 6, which would have prevented state employees from using their healthcare coverage for most abortions, and would have affected privacy rights in a way that could have led to further restrictions.

In Montana, voters approved a parental notification measure requiring girls under age 16 to notify a parent or seek judicial bypass prior to terminating a pregnancy.

Lessons learned and work to be done …

And if anyone needs a reminder of the work we still have before us, On the Issues magazine has appropriately titled its fall issue “The Day After.”

From the editor’s note: “On wide-ranging issues — the economy to the environment, reproductive freedom to voting freedom, sexuality to media representation — our writers, artists and thinkers in The Day After remind us to extend our vision beyond the ballot box to where we need to place our energies, build our muscles and put our feet on the ground every day of the year.”

In other words, it’s time to get busy — again.