On How a Bill Becomes a Law: The bill that will likely become the reconciliation bill on healthcare has been posted. Ezra Klein explains what it means.

Democratic leaders say a bill will pass this week.  House Minority Leader John A. Boehner (R-Ohio) pledges obstruction, saying Republicans will do “everything we can to make it difficult for them, if not impossible, to pass the bill.”

Jen Nedeau covers the multiple threats to women’s health and reproductive rights that must be addressed, including the House anti-abortion language. You know it as the Stupak/Pitts admendment. But Richard Doerflinger, the U.S. Conference of Catholic Bishops’ point man on abortion, should have had his name in there, too. Meanwhile, Jessica Arons tries to see the world through the lens of Rep. Bart Stupak (D-Mich.).

In an editorial in Monday’s paper, The New York Times urges anti-abortion Democrats to accept the Senate’s restrictive provisions, the lesser of two evils.

Too Many Tests, Too Much Treatment: “A spate of recent reports suggests that many Americans are being overtreated. Maybe even President Barack Obama, champion of an overhaul and cost-cutting of the health care system,” reports Lindsey Tanner of the Associated Press.

“More care is not necessarily better care,” wrote cardiologist Dr. Rita Redberg, editor of Archives of Internal Medicine, commenting on Obama’srecent physical, which included prostate cancer screening and a virtual colonoscopy. The PSA isn’t recommended at any age and a colonoscopyisn’t recommended under age 50.

Over-testing may be due to a combination of what is known as “defensive medicine” — doctors ordering tests and procedures because they’re trying  protect themselves against lawsuits (or because they’ll be compensated by a fee-for-service system) — and patients insisting on tests and treatments that they’ve heard about or know is commonly prescribed. But the thinking around more care = better care may be shifting.

“This week alone,” writes Tanner, “a New England Journal of Medicine study suggested that too many patients are getting angiograms — invasive imaging tests for heart disease — who don’t really need them; and specialists convened by the National Institutes of Health said doctors are too often demanding repeat cesarean deliveries for pregnant women after a first C-section.”

Stopping the Campus Rape Crisis: Jaclyn Friedman, executive editor of Women, Action and the Media and co-editor of “Yes Means Yes,” wrote a must-read op-ed in the Washington Post on ending the silence around sexual assault on college campuses.

First, colleges can eliminate the “miscommunication” excuse that many rapists use by creating an on-campus standard that requires any party to a sexual interaction to make sure their partner is actively enthusiastic about what’s happening — not just not objecting. They can create judicial boards equipped to seriously investigate rape accusations, instead of throwing their hands up at the first sign that the accused’s testimony contradicts the accuser’s. They can defend the safety of the entire campus by permanently expelling those found guilty of sexual assault. And they can be transparent about every step of the process.

Plus: The Center for Public Integrity recently released “Sexual Assault on Campus: A Frustrating Search for Justice,” an in-depth report filled with useful data, articles and resources. 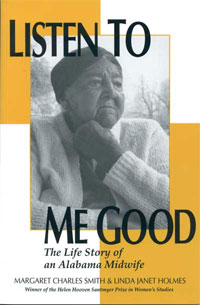 Recognition for Midwives: Granny midwife Margaret Charles Smith was inducted into the Alabama Women’s Hall of Fame at Judson College this month. Smith attended nearly 3,000 births between 1949, when she received her midwife permit, and 1981, when she attended her last birth. Her life story is told in a book Smith co-wrote with Linda Janet Holmes, “Listen to Me Good: The Life Story of an Alabama Midwife.”

Plus: Rachel previously noted that the National Library of Medicine is featuring an exhibition on African American midwives. “Nothing To Work With But Cleanliness: African American ‘Grannies,’ Midwives & Health Reform” tells the story of “granny” midwives and the state and local training programs that educated them and succeeding generations of midwives. View a wonderful set of photos from the exhibition on Flickr.

Utah’s Controversial Law Charges Women and Girls With Murder for Miscarriages: Writing at AlterNet, Rose Aguilar breaks down the problems with Utah’s new law that makes it a criminal offense for having miscarriages caused by “intentional or knowing” acts.

“What happens to women who are in abusive relationships?” asks Planned Parenthood’s Melissa Bird. “What happens if a woman threatens to leave the abuser, falls down the stairs and loses the baby? What if the abuser beats the woman and causes a miscarriage? Could he turn her in? Who would the prosecutor believe? What happens if a drug addict who’s trying to get clean loses her baby? Will she be brought up on murder charges?”

Some critics point out the legislators erred in not considering the lack of access that young people have to comprehensive sex education, and the overall lack of contraception and health services, especially in remote parts of the state.

The Girls Who Kicked in Rock’s Door: Not exactly health related (unless you’re like me and consider loud music essential for well-being), but I am completely intrigued by the “The Runaways,” the new film about the 1970s all-girl rock band, starring Dakota Fanning and Kristen Stewart. Sia Michel writes about the story behind the film and its director, Floria Sigismondi.