Before I start a week-long vacation Aug. 3, I’m attempting to clear out my bookmarks by posting several theme round-ups this week.

An Abortion Battle, Fought to the Death: The New York Times takes an in-depth look at the life and work of Dr. George Tiller, and the longstanding battle against him and his abortion clinic that ended with Tiller’s murder in May.

David Barstow writes about Tiller’s committed stance — quoting the doctor as having said: “If a stake has to be driven through the heart of the anti-abortion movement,” he said, “I want to have my hand on the hammer” — and what his death has meant to the abortion debate:

Scott Roeder, an abortion foe with the e-mail name “ServantofMessiah,” awaits trial in the murder. In a jailhouse interview, Mr. Roeder did not admit guilt but told a reporter that if he is convicted, his motive was to protect the unborn, a goal seemingly advanced when the Tiller family closed the clinic. But in the weeks since the killing, supporters and opponents of Dr. Tiller have been measuring the larger ramifications. Implacably divided for so long, they now agree on a fundamental point: Dr. Tiller’s death represents an enormous loss for each side.

Also, here’s another New York Times story, “The Deadly Toll of Abortion by Amateurs,” which presents these startling statistics:

Worldwide, there are 19 million unsafe abortions a year, and they kill 70,000 women (accounting for 13 percent of maternal deaths), mostly in poor countries like Tanzania where abortion is illegal, according to the World Health Organization. More than two million women a year suffer serious complications. According to Unicef, unsafe abortions cause 4 percent of deaths among pregnant women in Africa, 6 percent in Asia and 12 percent in Latin America and the Caribbean. 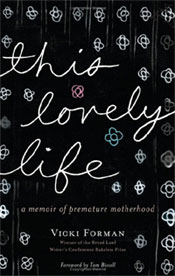 Born Too Soon: Vicki Forman, author of “This Lovely Life: A Memoir of Premature Motherhood,” writes in her new book: “My husband and I had tried for two long years to conceive these twins, had lived through miscarriages and fertility treatments to bear them. When I learned they were coming so early and so fragile, I had only one wish: to let them go.”

Salon interviews Forman about her reaction to delivering twins at 23 weeks, how her wishes conflicted with hospital policy, and the joy and heartache that resulted. Read her story.

Surrogate Pregnancies, the Update: “Much has changed in surrogacy in the two decades since the high-profile Baby M case, in which the surrogate was the baby’s biological mother and unsuccessfully sought custody after the birth,” writes Jane Brody in The New York Times.

A Victory, of Sorts: National Advocates for Pregnant Women reports on a New Jersey case involving a question of consent for pregnant women:

Last week, a mid-level court of appeals in NJ avoided deciding the question of whether or not a pregnant woman’s decision-making during labor and childbirth may be the basis for a finding, under state civil child welfare laws, of abuse and neglect. While the decision is a victory of sorts, it nevertheless reveals how extraordinarily unsettled and contested pregnant women’s rights are.

In this case, called New Jersey Division of Youth and Family Services v. V.M. and B.G., In the Matter of J.M.G., a woman’s refusal to sign a consent form for cesarean surgery led to hospital interventions and a report of abuse to child welfare authorities. This resulted in a child welfare investigation, the state’s decision to remove the child from her parent’s custody at birth, and a court finding that both parents had committed medical neglect. Ms. M., by the way, would have consented to cesarean surgery when and if it became necessary, never in fact needed cesarean surgery and delivered a health baby, vaginally.

Repeat C-Section, or Vaginal Birth?: Amie Newman reports on the safety and costs of having a vaginal birth after a previous c-section, instead of having a repeat c-section.

“What we know is that, making allowances for the overuse of medical interventions during childbirth, vaginal birth in the United States carries inherently less risk to the mother than c-sections do and can lay the foundation for more choices for future childbirth options as well,” writes Newman. “Now, with this new study, the evidence also suggests that babies born via c-section have poorer health outcomes than do newborns born vaginally.”

Protect Pregnant Prisoners: In May, the New York State Legislature passed an anti-shackling measure prohibiting correctional authorities from using restraints on a pregnant inmate who is in labor and is being transported to the hospital. It’s time for Gov. David Patterson to sign the bill into law.

Here’s one woman’s story, as reported in The New York Times earlier this month:

One day last November, the first shudders of childbirth woke Venita Pinckney before dawn. She was well into her ninth month of pregnancy. She was also incarcerated at Bedford Hills Correctional Facility, a state prison.

Before she left for the hospital, Ms. Pinckney said, a corrections officer wrapped a chain twice around her waist and handcuffed her to it. Then he covered the handcuffs with a locked black box to further limit her range of motion. Finally, her ankles were shackled.

“You can’t walk like a normal human being,” said Ms. Pinckney, 37. “When you’re pregnant, you have a hard time keeping your balance to begin with.”

At least once a week, somewhere in one of New York’s prisons or jails, a pregnant women goes into labor. Nearly all of them, including Ms. Pinckney, are behind bars for drug offenses. Even so, they are often as severely restrained in the final hours of pregnancy as the most nimble and dangerous of criminals. While their bodies heave toward childbirth, they become walking, clanking jail cells.

Later in Life: This Detroit Free Press story about fertility problems and increased health risks for children born to older mothers and fathers quotes Dr. Kristen Wuckert, an ob-gyn at Mission Obstetrics and Gynecology in Warren, Mich., who has seen an increase in the number of older mothers over the years:

“It makes sense that women are waiting longer to start families — college, careers, not meeting the right person earlier in life […] Another reason women wait is because they can. We have a lot more options, albeit expensive ones, to help in getting pregnant. It has also become more the norm than the exception.

“We see celebrities in their 40s and older doing it — why not us?” she adds.

Why not, indeed — the story presents a sidebar feature on at least seven celebrity “mature mommas.”