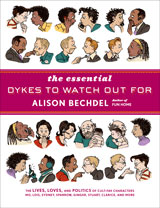 Lesbians Star in the Funny Pages: In case you missed it, Alison Bechdel’s “The Essential Dykes to Watch Out For” got a fab review in The New York Times. Dwight Garner not only heaps tons of praise, but he writes like a genuine fan, and the review is very enjoyable to read.

Even Bechdel is impressed. She wrote on her blog: “Lemme tell you whippersnappers. I can remember when the Times wouldn’t even print the word ‘dyke.’ In fact, somewhere in my vast archives I have a tiny clipping from 1983 or so … maybe even later … containing the first instance of the Times using the word ‘gay,’ as opposed to ‘homosexual.’ I’m just saying.”

Here’s a sampler from the book.

Healthcare Overhaul Remains a Priority: “Former Sen. Tom Daschle, who is slated to oversee health-care policy in the Obama administration, is kicking off the effort to pass a comprehensive health-care plan,” reports the Wall Street Journal. And that effort includes you:

Mr. Daschle, who Obama transition officials say will be nominated secretary of Health and Human Services, will suggest that Americans hold holiday-season house parties to brainstorm over how best to overhaul the U.S. health-care system. He will promise to drop by one such party himself, and to take the ideas generated to President-elect Barack Obama.

The parties are part of an effort by the new administration to apply organizing tools from the presidential campaign to the more-complex task of governing. “What’s next for our Health Care Team? You are,” Mr. Daschle will say at the 2008 Colorado Health Care Summit, an event organized by Sen. Ken Salazar (D., Colo.).

Plus: Sign the petition to make breastfeeding a priority for the new administration. Via the U.S. Breastfeeding Committee.

What Women Want: YWCA USA recently released a national survey (PDF) of American women and their priorities for the new administration, including opinions on the financial crisis, healthcare reform and racial justice. Here’s a summary of the key findings. The survey was released in conjunction with the YWCA’s 150th anniversary.

You Know the Health Care System is Broken When …: A company sells you insurance to protect your right to buy health insurance. Read more. 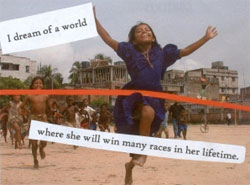 Dream Big in 2009: This 2009 Dreams for Women Calendar features 12 postcards designed by people around the world in response to the question: What is your dream for women?

Funds raised from the sale of the calendar go to the Antigone Foundation, which encourages political and civic engagement for young women. The calendars are also available to women’s organizations to use as part of their own fundraising efforts.

Recommended Reading: And a Doula, Too recommends a number of books and online resources about pregnancy and birth, including OBOS’ own new book on the subject. When it comes to baby books, she offers this sage advice:

Be warned that every baby book I’ve ever seen or heard about has an agenda about how you should raise your child, and friends (and indeed strangers) will probably go nuts telling you they “swear by” such-and-such a book or method that probably isn’t a perfect fit for your family (especially when it comes to the touchy and highly individual subject of “sleep solutions”). I worry that we’re setting ourselves up for failure if we do anything other than learn a lot, trust ourselves, and find a pediatrician who shares and understands our values and ideas about pediatric care.

This concern extends to apparently objective books like the big American Academy of Pediatrics one (Caring for Your Baby and Young Child); it’s not that it’s bad to have or anything, but I’m glad that my partner and I feel confident enough to do our own research and disregard any book’s advice when appropriate for our own situation.

Birthing Practices in Bolivia: From Women’s eNews: Jean Friedman-Rudovsky reports that Bolivia has stemmed maternal and infant death rates by providing free medical care during pregnancy and childbirth. But many women prefer to labor at home rather than take free care at hospitals that comes packaged with birthing horror stories.

Certified Organic Male?: Alan Greene, a pediatrician in California, has performed an experiment of sorts on himself — all the food he’s eaten for the past three years has been organic. I loved this part:

The biggest surprise of the whole experience, he says, was that many people still don’t know what “organic” means.

“It’s surprising to me how few people know that organic means without pesticides, antibiotics or hormones,” he said. “In stores or restaurants around the country, I would ask, ‘Do you have anything organic?’ Half the time they would say, ‘Do you mean vegetarian?’”

Skin Deep: Nanophobia: “It sounds like a plot straight out of a science-fiction novel by Michael Crichton. Toiletry companies formulate new cutting-edge creams and lotions that contain tiny components designed to work more effectively. But those minuscule building blocks have an unexpected drawback: the ability to penetrate the skin, swarm through the body and overwhelm organs like the liver,” reports The New York Times. Um, yeah.

Don’t Worry – It’s Contagious: A study published in the British journal BMJ found that happiness really can be passed on to others. Here’s a related commentary and editorial, plus more from the AP. Cheers to you this weekend!