The New Health Insurance Model: In the first of a three-part series, the L.A. Times looks at the changing insurance scenario — where once working Americans could rely on employer-based benefits, now more people are being forced into the individual market, where coverage is costly, bare-bones and precarious.

Part two looks at the business side of managing health savings accounts, and part three covers the battle between doctors and insurers. Meanwhile, health care costs continue to rise.

Plus: Read more about how the individual health insurance market fails women. It’s a great report from the National Women’s Law Center.

No Candy or Condoms: Divine Mercy Care Pharmacy in Chantilly, Va., drew attention this week for becoming at least the seventh pharmacy in the United States to refuse to sell contraceptives of any kind, even if a person has a prescription. The decision, say owners, is guided by Roman Catholic teachings, though the pharmacy is not affiliated with the Catholic church. Still, it did receive a blessing from Arlington Bishop Paul S. Loverde. From the AP:

“This pharmacy is a vibrant example of our Holy Father’s charge to all of us to wear our faith in the public square,” said Loverde, who sprinkled holy water on the shelves stocked with painkillers and acne treatments. “It will allow families to shop in an environment where their faith is not compromised.”

Too bad everyone can’t shop in an environment where their health is not compromised. In Virginia, pharmacists can turn away any prescription — for any reason.

Prop What?: Heather at Scarleteen gives a good overview of several important ballot measures that will be up for vote Nov. 4 in states from Arkansas to South Dakota, “such as parental notification laws for minors who want an abortion, age of consent laws, same-sex marriage, civil rights, stem cell research, education issues, even a proposal to lower the voting age for primaries in one state (whoohoo!) and another to ban abortion outright (grrrr).”

Plus: Look up ballot measures for your state here. 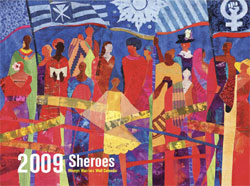 2009 Sheroes: Next year’s Sheroes Womyn Warriors calendar is now available for sale (check out the beautiful cover art by Ekua Holmes!). The calendar honors change agents, rebels, radicals and revolutionaries of different times and places around the globe.

“This is definitely not a ‘great women of history’ celebrity calendar,” reads the back cover. Instead, this is a calendar “of womyn who have challenged their societies and who have advanced the struggle of the oppressed and exploited.”

Proceeds support the Gustavus Myers Center for the Study of Bigotry and Human Rights at Simmons College.

Plus: Send in suggestions for who should be included in the 2010 calendar.

Seen But Not Heard: Jeannine Stein at the L.A. Times writes: “Researchers at Texas Tech University Health Sciences Center in Lubbock interviewed eight overweight women ages 20 to 61 to learn about their experiences with the healthcare system, then published their findings in this month’s Journal of Advanced Nursing. During interviews about their experiences, four themes became apparent: struggling to fit in, feeling not quite human, being dismissed, and refusing to give up.”

Scary Sexy Costumes for Kids: “Halloween costumes are reflecting an increasingly sexualized childhood. They often reflect the stars and starlets and popular culture role models that girls have, starting with Disney princesses or Hannah Montana when girls are young. But even traditional favorites, like witches and pirates are sexier every year. And French maids are quite the thing for tweens and teens,” said Diane E. Levin in a Q&A about Halloween costumes and gender roles.

Levin is co-author with Jean Kilbourne of “So Sexy So Soon: The New Sexualized Childhood and What Parents Can Do to Protect Their Kids.” 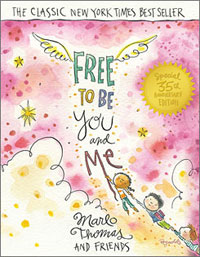 Life’s Lessons: On the other side of what’s good for kids, “Free to Be You and Me,” which has never gone out of print since its 1973 debut, was reissued this month with a new, expanded edition, reports USA Today.

Jessica Reaves of the Chicago Tribune, who also made her debut in 1973, writes about the book’s appeal and the lessons that have remained incredibly relevant for more than three decades:

Some critics of “Free to Be” accused Thomas of advancing a radical feminist agenda. They pointed to the book’s co-producer (the Ms. Foundation for Women) and Thomas’ role on “That Girl,” the first television program to shamelessly promote the career girl lifestyle. (I mean, really: Ann Marie strung that poor Don along for four years before she finally agreed to marry him!)

As a feminist born into a family of feminists, I’m biased: I happen to think adopting a feminist agenda is the best thing that could ever happen to this country. (Trust me, it hasn’t happened yet.) But those long-ago critics were right about one thing. The witty, wise lessons of “Free to Be” do underscore feminism’s fundamental tenet: namely, that everyone — male, female, black, white, brown, young, old and in between — should be treated equally and empathetically. Yes, even the jerks.

You only need to glance at the headlines to know we’re not quite ready to cross that particular item off our collective to-do list. Which isn’t to say we haven’t learned a lot in the 35 years since “Free to Be” was published. It’s just that we may need another 35 years for it all to sink in.