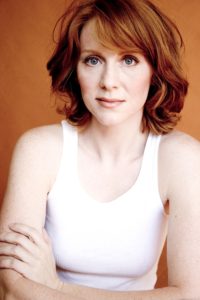 Katherine Stone was a beacon of light during the darkest time of my life. I suffered from postpartum obsessive-compulsive disorder (that is a postpartum mood disorder where you get terrible, scary thoughts that won’t go away) that began after the birth of my son Henry a year ago.

I was lucky to get professional help early due to the support system I had in my life, yet I still suffered tremendously. Not even the best psychiatrist in the world can help you heal totally from the horror of having had awful thoughts that sometimes involve images of hurting your own child.

One night in despair I stumbled upon Katherine’s blog, Postpartum Progress. Finding Katherine and the amazing community of postpartum mood disorder survivors she has created helped me find peace. I felt for the first time since my son was born (and not just from my therapist telling me) that I was not alone on my occasional forays to the dark side of this disease; in fact, I’m in the company of some pretty amazing women!

Unfortunately, not all women have the support network I had to get professional help to stop their suffering. Those tragic stories we hear on the news of women taking their own lives or harming their children are the result of a general lack of education about the many forms of this disease and its successful treatment.

Postpartum depression and perinatal mood disorders will affect over 800,000 women this year in the United States alone, and Katherine Stone is a full-time peer advocate for these women through her blog and her other activist work, such as being a contributing blogger for PBS’ “This Emotional Life” site, and guest editor on postpartum depression for BlogHer, a popular community for and guide to blogs by women. Katherine currently serves on the board of directors of Postpartum Support International and the advisory board of the Perinatal Depression Information Network.

Some studies show that one in eight women suffer from postpartum mood disorders, and a majority of them go undiagnosed. Clearly many women are scared to admit to their family, friends or doctors what is happening to them, but many will turn to the privacy of the internet. And this is why I know in my heart that Katherine has created a forum to help new mothers like me find our way back to the joy of our families and even, for some of us, to save our lives.

Her website provides not just a comprehensive resource on the topic of these illnesses, but a personal sharing of her experiences and process of recovery; Katherine suffered postpartum OCD herself after the birth of her first child. The feelings of fear, isolation and shame she experienced inspired her to take create this blog, which is now the most widely-read blog in the United States on mental illnesses related to pregnancy and childbirth. And it was this fearless intimacy about one of the most shameful diseases that gave me the courage to truly stand up to it and that I’m sure has helped other woman to do the same, including getting the professional help and support from their families they desperately need.

Postpartum Progress now has more than 10,000 unique visitors each week from all over the world, and Katherine personally responds to the emails she receives daily from women who suffer, as well as from clinicians. She uses her voice every day, through writing and speaking, to ensure the voices of all mothers with postpartum depression are represented and to help eliminate stigma.

Postpartum Progress has a Surviving & Thriving Mothers Photo Album, the only public photo album displaying pictures of moms who have survived perinatal mood and anxiety disorders. This album combats the negative images of postpartum depression and psychosis shown in the media, and is a symbol of hope for recovery. I know when I’m feeling down about what happened to me that I will always feel inspired by logging on and viewing these beautiful families.

Katherine also leads the charge in speaking out assertively against unbalanced or misleading medical coverage of perinatal mood and anxiety disorders. In 2009, she wrote a letter and gathered the endorsements of nearly 50 clinicians, survivors, authors and advocates in response to a misleading article in Time magazine about postpartum depression screening. Time chose it as one of its 2009 Letters of the Year.

I am nominating Katherine Stone as my Women’s Health Hero as she is bringing light and truth to one of women’s oldest and most closeted diseases, and love and hope to those of us affected by it.