Our Bodies, Ourselves, a best-seller released in the United States in 1971, has been translated to 32 countries and only now gets a version adapted to Brazilian reality 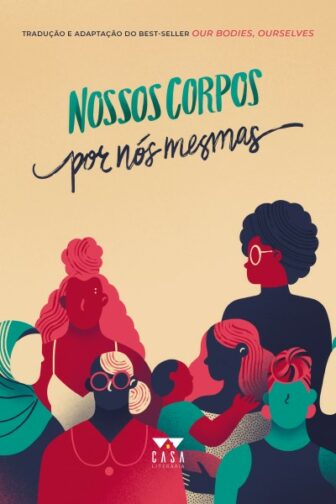 Which tips a woman should follow to have safe sex at any age? Among the possible practices, which have low, medium and high risk? Who owns the responsibility for birth control?

These and many other questions start being answered in the next days, without beating around the bush, from women to women, in the translation and adaptation of the bestseller Our Bodies, Ourselves, “Nossos Corpos por Nós Mesmas” (“Our Bodies for Ourselves”, in Portuguese). The original book, published in the United States (U.S.) in 1971, had been translated to 32 countries, but only now, 50 years later, it gets its first version in Portuguese, adapted to Brazilian reality.

Called a “feminist classic” by newspapers like the North-American The New York Times and the British The Guardian, the book is also considered some kind of women’s health and sexuality bible and one of the icons of the North-American feminist movement at the time. It came up as the outcome of the collective work of The Boston Women’s Health Book Collective, and addresses subjects such as abortion, body image, pregnancy, menopause, childbirth, racism, birth control, reproduction, safe sex, violence and LGBTQ+ issues. In addition to that, there are real women’s narratives. The last edition contains 927 pages and 27 chapters.

In Brazil, the “bible” gathered a diverse group of women apostles who decided to translate and share OBOS message with Brazilian readers. Universa talked to women involved in the project, which will be released in three different volumes – the first one, in July 7 – and publishes, exclusively, extracts from the first volume.

Three different groups reunited to publish the book in Brazil. This happened in 2019, when students and professors from the University of Campinas (Unicamp) and the Federal University of Rio de Janeiro (UFRJ) expressed, to the collective responsible for publishing OBOS in the U.S., the intention of bringing their works to the Brazilian public. In the same year, the Feminist Collective for Health and Sexuality (CFSS), from São Paulo, would ask the same thing to the North-American group.

The Boston Group requested that the São Paulo collective coordinate the works with the two universities. The Brazilian edition, translated and adapted by a group of almost 40 people, mostly women, is a reviewed and updated version of the text. It not only considered cultural and legal aspects and services intrinsic to the local reality, but also added chapters on women’s health services in the Brazil’s Unified Public Health System (SUS) and on obstetric violence.

The movement reaches out to the book’s original purpose: provide women with accurate information so that they can decide what is best for them. In this regard, the book emphasizes purposes such as perceiving any abuses suffered in the health system and not being coerced by the medical discourse as the only source of knowledge.

“It is a subversive book as it deals with health from a non-medical point of view, with testimonials from real people, and which, for that very reason, returns to our hands the autonomy and the power to make informed choices. If I think this is revolutionary today, can you imagine in the 1970s?” asks Raquel Pereira, financial manager of the feminist collective and general coordinator of the project.

Scientific Evidences From a Feminist Perspective

One of the people responsible for adapting the best-seller to our reality is the public health physician Simone Diniz, professor at the Faculty of Public Health from University of São Paulo (USP). According to her, the boldness of the book is to awaken the readers to experience their own bodies, without considering it as something capable of generating pain and frustration, but with the possibility of experiencing cycles: menstruating, ovulating and wishing for a pregnancy or maintaining sex relationships free from the risk of pregnancy.

“It’s living each stage of the female body, including aging, with a positive perspective, with the potential to have pleasure and satisfaction with one’s own body, something that the misogynist culture does not admit, but which is very important,” says Simone, to whom the book is transgressor. “OBOS works with scientific evidence and from a feminist perspective – after all, it is women talking to women,” says the professional. “So it also talks about the large number of medical interventions that are of low value in promoting health.”

Beatriz Foschi, 58, also active in the adaptation of the work, is an advertiser and doctor in public health who reinforces that the Brazilian version of OBOS remains a reference in female self-care. She was responsible for collecting testimonies from women of different sexual orientations that illustrate issues covered by the book. “Nobody at work judges what is right and wrong: these are people’s stories and giving voice to them was a great learning experience,” she says.

Excerpt From the Chapter “Contraceptive Methods”

Our culture and the media rarely talk about the responsibility men should have in preventing STIs and unplanned pregnancies. The information provided about contraception is aimed at women and often ignores the impact that unprotected sex can have on men. Using a penile condom is the easiest way men can find to participate in the contraception process, but they need to be willing to do so. Some men are not interested in using it because they hear that is not a man thing or they have preconceived ideas that sex is not so good with a condom. These attitudes reveal a lack of sex education and a lack of respect for their partners, besides of exempting men from taking responsibility for their actions.

In addition to buying and using condoms, they can also help pay for any medical appointments or medications; be part of the decision to invest in a long-lasting reversible method of contraception; help remembering to take the pill every day if that is the method of choice; help removing the diaphragm or inserting the spermicide and seeing if these products are running out.

Among the chapters translated by the Unicamp team, there were themes such as anatomy, reproduction and the menstrual cycle, but under an approach that delegates to women the authority over their own bodies. Instead of the illustration of a vagina, for example, there is guidance for the reader, armed with a mirror, to know her own sexual organ.

“Some things had a greater impact on the team, at first, especially talking on equal terms with a doctor, asking questions and questioning the use of medications due to side effects, for example,” says Professor Érica Lima, coordinator of translation in the Unicamp team.

Another concern of the translation was the adoption of an inclusive, but not neutral, language — exchanging terms that, in Portuguese, would be masculine, like “doctors” (os médicos), for others, like “class” or “medical staff” (a classe ou a equipe médica) — so that this book could reach out to many women as possible.

“In translation, we sought to use strategies that contradict the binary of the Brazilian Portuguese language and adopted a language as inclusive as possible,” says the coordinator of the translation at UFRJ, Janine Pimentel, leader of the University’s Translation Studies Center. Janine explains that the translation and adaptation teams were entitled so that adjustments capable of connecting the work to the current Brazilian reality were effectively carried out.

Asked about the repercussion that the Brazilian adaptation will acquire, in times of exacerbated ideological patrolling, the professor admitted: “We are afraid that there will be some reaction, yes, but the book is so urgent and necessary that we can only have a lot of courage and give our best for something that, even though it comes late, remains fundamental. We know how important and valuable this work is and all that it represents.”

Raquel Pereira, general coordinator of the project and administrative-financial coordinator of the Brazilian collective, reinforces: “This is a challenge that we are willing to face. From linguistics choices to the chapters chosen for this first volume, everything is a form of fight, of resistance, militancy, to empower women with accurate information so that they can better decide for themselves – for ourselves. After all, information is power”.

Excerpt From the Chapter “Body Image”

Because of our intense focus on fitness, our feelings about weight often intertwine with how we feel about ourselves. “Do I look fat?” is a mantra said by many women, but at its core, it has little to do with weight. Researchers have found that young women often express themselves through what is called “talk about being fat.” In such conversations, as a way of connecting with our peers, we talk about the body in a self-deprecating way, with talk about weight replacing feelings-oriented talk. “I’m so fat” usually means “I’m depressed” or “My life is out of control.” In return, friends often assure the girl that she is thin, thus increasing her self-esteem. Such conversation can take some girls from an early stage to an advanced stage on the spectrum of eating disorders.

The book “Nossos Corpos por Nós Mesmas” will be released by publisher Grupo Estante. The first volume goes on pre-sale on July 7 and will include seven chapters: Our Female Bodies – Sexual Anatomy; Reproduction and Menstrual Cycle; Body Image; Contraceptive Methods; Safer Sex; Abortion; Violence Against Women in Brazil; and Environmental and Workers’ Health.

The second volume – with topics such as introduction to sexual health, gender identity and sexual orientation, pregnancy and childbirth – should be released by the end of the year. The third and last, which will approach infertility, menopause and 21st century activism, is projected to launch in 2022.

The book will be on pre-sale from July 7 on the website of the publisher Grupo Estante. With the cost of R$ 45 (US$ 8.50), the profit from the sale of the work will be reverted for initiatives to defend women in Brazil.