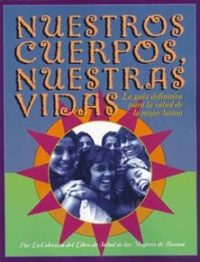 Translation of book title: Our Bodies, Our Lives

The 2000 edition of Nuestros Cuerpos, Nuestras Vidas is a cultural adaptation of Our Bodies, Ourselves created specifically by and for Latina women. “Guía de Capacitación para Promotoras de Salud Training Guide,” a companion curriculum guide for community health workers, followed in 2002.

The coordination and structure of this project is unique. Recognizing how essential it was for Nuestros Cuerpos, Nuestras Vidas to reflect the plurality of cultures, politics and economics of Latinas throughout the Americas, OBOS initiated a collaboration with 19 women’s health groups from 11 countries in Central America, South America, and the Caribbean. The book was published by Seven Stories Press.“An effective and unprecedented effort that will prove equally useful for a woman living in Mexico as for a girl in secondary school in Colombia, or a grandmother who has immigrated an now works in the United States.” –El Puente Latino

Participants spent four years revising chapters of the 1992 and 1998 editions of Our Bodies, Ourselves. Like the original text, Nuestros Cuerpos, Nuestras Vidas honors the personal stories of women; however, it acknowledges that Latina perspectives on health and sexuality differ from those expressed in the U.S. edition, and issues of cultural identity and politics, along with living between Latin America and United States, inform the health of Latina women.

Ester Shapiro, a member of the Nuestros Cuerpos, Nuestras Vidas editorial team, wrote the preface, which goes into great detail about the development process, and created a comparison of organizing principles.

The collaboration was discussed during OBOS’s 40th anniversary symposium in 2011. Nirvana Gonzalez Rosa, co-founder of Taller Salud, the first feminist organization in the Caribbean, and coordinator of the Latin American and Caribbean Women’s Health Network in Chile, took part in a symposium panel on building power and brokering change. She played a key role in connecting and coordinating organizations during the adaptation process.

Reviewing the book for Sojourner back in 2001, Ana Ortiz wrote:

The impressive work carried out by the contributors and editors of Nuestros Cuerpos, Nuestras Vidas has created a powerful testimony to the social justice principle that affirms that it is in attending to the needs of those at the perceived margins and greatest socioeconomic disadvantage that the needs of many, and of those “at the center,” are best served.

A New York Times review of the book discussed the differences between the U.S. and Latin American editions:

Now, in a new Spanish-language edition intended for a growing Hispanic population, Our Bodies, Ourselves is emphasizing mutual help over self-help and a woman’s need to take care of herself so she can better care for others. Religion is acknowledged for the first time and even the book’s new title, Nuestros Cuerpos, Nuestras Vidas — or, Our Bodies, Our Lives — was recast to reflect interdependence instead of individualism.

Note: In 1977, OBOS collaborated with Leonor Taboada and Raquel Scherr Salgado to produce the first Spanish translation, Nuestros Cuerpos, Nuestras Vidas. Foundation grants enabled OBOS to self-publish about 50,000 copies that were distributed throughout the United States and Latin America. This early translation is not connected to the 2000 adaptation project described here.

Excerpts from introductions to the following chapters are available in Spanish and English.

Print copies can be ordered from the publisher, Seven Stories Press, which sells the book on its website.

Part One: Knowledge is Power
1. International Perspectives
2. The Politics of Women’s Health and Health Care System
3. How We Can Organize for Change
4. Introduction to Online Women’s Health Resources

Please contact Our Bodies Ourselves for information on clinic discounts or if  you have questions related to this publication.

In the early 1980s in Boston, a group of Latinas — Elizabeth MacMahon-Herrera, Maria Lourdes Mattei and Loly Carrillo — formed Amigas Latinas en Accion pro-Salud (Latina Friends in Action for Health), or ALAS. Throughout the 1980s and 1990s, ALAS was dedicated to innovative community health outreach, using pamphlets, radio, and street theater — mainly for the Latino community of Boston and, in later years, New Mexico.

ALAS worked alongside OBOS as a sister organization as it produced the first Spanish language educational AIDS video in the United States. Over time, ALAS affiliated itself with OBOS and was incorporated as a major program area. ALAS members supported the work on the ambitious Latin American translation and cultural adaptation of Our Bodies, Ourselves, which was managed and directed by the “Nuestros Cuerpos, Nuestras Vidas” (NCNV) program team at OBOS (this team would later become the Latina Health Initiative).

Through a creative trialogue/trialogo between the U.S. text, collaboration with 19 women’s health groups from 11 countries, and the Boston editorial team, “Nuestros Cuerpos, Nuestras Vidas” became a transnational edition for women of Latin American and Caribbean descent, wherever in the world they might live.

Directors and other key leaders in this project — Rosie Munoz-Lopez, Mayra Canetti, Maria Morison Aguiar, Veronica Nielsen-Vilar and Ester Shapiro — synthesized the work of activists and translators from feminist and women’s health organizations throughout the region.

In 2001, OBOS launched its Latina Health Initiative (formerly known as ALAS) under the direction of Zobeida Bonilla. The program’s focus was the development of “Promotoras de Salud” (2002), a companion curriculum guide to “Nuestros Cuerpos, Nuestras Vidas.” The guide is used by peer health educators in training programs across the United States and Latin America, and the program now focuses on distributing Spanish language materials online.

OBOS and its collaborating partners approached this project with the hope that the publication of “Nuestros Cuerpos, Nuestras Vidas” and the dissemination of Latina-directed health information would provide an opportunity for outreach, prevention awareness, and network-building in Spanish-speaking communities. It would not have been developed without the energy, commitment and expertise of these groups and the book’s publisher, Seven Stories Press.

Those mentioned above and contributors listed below have worked passionately to address the health needs of Latinas in Boston and far beyond. We acknowledge them with deep respect and appreciation.

“As the largest sheltering program in New England for battered women and their children, we recognize the importance of a resource such as ‘Nuestros Cuerpos, Nuestras Vidas.’ Our staff, as well as the women we serve, will greatly benefit from this publication in that it provides important health information in such an empowering format.”
– Debra J. Robbin, Director of Education & Training, Casa Myrna Vazquez, Inc.