When Los Angeles-based artist Joanne Mitchell wrote to us with news of the removal of a gender-oriented work from the Bucharest International Biennale, we asked her to share the information with readers. Joanne’s piece “Our bodies, ourselves – the book, I mean” will be showcased as part of the organization’s 40th-anniversary celebration in 2011. 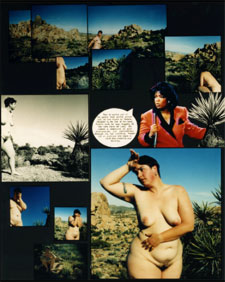 The Bucharest International Biennale opened last week without “Tit for Twat,” a 20-year long, ongoing project made by a former teacher of mine, the artist Kaucyila Brooke.

“Tit for Twat” is a three-part epic that takes the form of photo montage, and re-imagines the creation story from the perspective of two lesbian protagonists (view it here). It is intelligent, challenging work, sweetly sprinkled with just the right touch of humor – exactly the caliber of work I aspire to make as a lesbian-feminist artist.

The work was supposed to have been installed as part of the Biennale at Bucharest’s Institute of Geology but was shockingly pulled at the last minute by the director of that institution.

Kaucyila has consistently challenged conventional thinking on gender and sexuality throughout her long and distinguished career as an artist and as a teacher at California Institute of the Arts. It is troubling that her work is being kept from view during this international event.

Kaucyila was influential in support of my project “Our bodies, ourselves – the book, I mean” while I was a student of hers at CalArts. She contributed a wonderfully engaging story about her experience with “Our Bodies, Ourselves” that I present in a video installation. My project tracks the history of the book “Our Bodies, Ourselves” and offers viewers an opportunity to engage critically with the history and trajectory of the women’s movement. I will be presenting the project as part of the 40th Anniversary Celebration of Our Bodies Ourselves in Boston in 2011.

Here are some statements on Kaucyila’s behalf:

Kaucyila Brooke’s “Tit for Twat” is a challenging piece of artistic literature about some of the most important topics affecting our humanity. It is a deeply thought out and literate investigation into the stability of gender categories and our deep mythopoetic narratives of origin. Some viewers will not like it, some will outright disagree. But these dissenters and others will all find wholly new dimensions of thinking about humanity’s fixed categories of being.

None of that can happen in the face of censorship, a form of silencing cloaked in cowardly evasiveness. The Arts are one of the very few global cultural spaces where repressions of difference may — and indeed must be — freely explored for humanity to find ways to move on, allowing discovery, discussion (however contentious), and progress towards a more tolerant world. It is a grievous blow to that future tolerance that the Bucharest Biennial has allowed Art’s precious freedom to be compromised in the interest of pathetic inoffensiveness.

– Ellen Birrell, Artist, Publisher and Editor, X-TRA, a Quarterly Journal of the Arts

In “Tit for Twat” by Kaucyila Brooke, Madam and Eve are standing on the edge of human evolution, curiously embarking on a journey through space, time and history. Intellectually fascinated by the idea of “nature,” they decide to visit various historic gardens, to question the biblical assumption of heterosexuality (Adam and Eve), and to deal with their relation towards other theories of origin. Especially in a Catholic country, the piece is highly provocative but don’t we need provocative works in order to discuss future ways of living?

In our times of passage, a time that implies a certain chaos, structures are going to disappear and the new is not yet at the horizon. Especially in uncertain times, we have to open our minds, we have to be able to ask questions, we have to show critical works and we have to discuss them — but not to exclude them. No religious or political authority can provide us with a clear definition of meaning, or communicate a socially sanctioned aspiration for the collective implementation of a utopia or a promise of redemption.

Therefore, the act of censoring works (without even discussing it) is against society, is against all that contemporary art stands for today and questions the intent of the Bucharest Biennial as a whole. Believe in your audience and give them the opportunity to decide for themselves.

“Tit for Twat” will not be seen at the Biennale, but you can view images and text from dialogue balloons online at http://www.kaucyilabrooke.com. Please share this with anyone interested in feminist art and censorship.