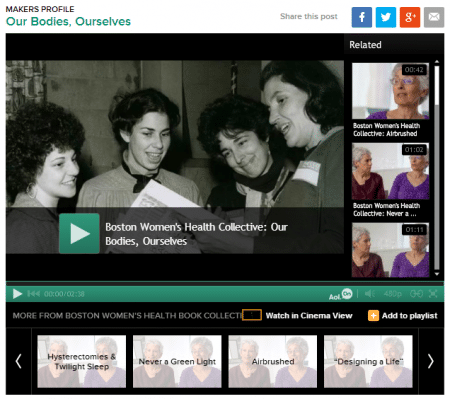 “Makers: Women Who Make America,” the PBS/AOL documentary, debuts tonight on PBS at 8 p.m. (check local listings). If you’re on Twitter, join the discussion during the broadcast at #MAKERSchat.

Narrated by Meryl Streep, the film covers the last 50 years of the women’s movement — the accomplishments and setbacks that followed the publication of “The Feminine Mystique.”

“Most of us have seen the old television commercials before, those 1950s ads that marketed products by telling women how stupid and disappointing they were. So, in the beginning, this program feels like old news (one generation has seen it all before, and the other doesn’t care), but the narrative quickly comes together and still has the power to astound,” writes Anita Gates in The New York Times.

“Our Bodies, Ourselves” founders Judy Norsigian and Miriam Hawley were interviewed for Makers about the medical and social conditions that prompted a group of women to research, publish and distribute their own findings on women’s health and sexuality. Their interviews are available online.

“You have to understand that back in the late 60s, 98 percent of OB-GYNS were male. About 90 percent of all physicians were male. There was a tremendous amount of condescencion and paternalism,” says Norsigian, who is also executive director of the organization Our Bodies Ourselves.

“I remember one doctor saying to me, dear dear, you’re a smart intelligent woman — you ought to have more children,” says Hawley, later noting, “I kept saying we’re going to sell a million copies. And people kept laughing till we did.”

And, of course, Gloria Steinem.

Some of our colleagues in health activism are featured, including Susan Love, who discusses innovative breast cancer research as well as her own coming out story:   “Living out loud really allows you to be who are and to get into the work you need to do as opposed to spending a lot of time trying to protect yourself.”

Byllye Avery, founder of the Black Women’s Health Project (now the Black Women’s Health Imperative) and co-founder of Raising Women’s Voices, discusses access to abortion and opening a women’s health clinic in Florida — and working to “de-medicalize” the interior with shag carpeting, posters on the ceiling, and pot holders on the stirrups (to eliminate the chill). She also addresses the importance of community and self-care on multiple levels.

“Once you can get the emotional stuff straight, then you can start talking about the body,” says Avery. “Because if I’m worrying about someone coming home and beating me, I’m hardly thinking about I haven’t had a pap smear in five years.”

Sharing personal stories, Avery reminisces about her late husband, who died suddenly of a heart attack in 1970. Before his death, he recommended “The Feminine Mystique,” which he thought she would appreciate.

“I hated that I didn’t read it before he died so we could have had some discussions, ’cause I could have confronted him about the dishes,” she said.

Makers.com is a historian’s treasure trove, yet it also covers history in the making with the inclusion of younger women like media creator Tavi Gevinson, editor of Rookie magazine (Gevinson praised the new “Our Bodies, Ourselves“), feminist organizer Shelby Knox, and youth organizer Maritza Alarcón, whose energy about her work is infectious.

The Makers blog has pulled together quotes around timely themes, such as “5 Views on Job Flexibility” and “5 Views on Women in Film– Past, Present and Future.”

One of Norsigian’s online interview segments addresses finding support, and she concludes with this advice:

“Don’t go it alone, if possible. Get in place the kinds of friends and families around you that will make it possible to be a good parent, a good co-worker, and to contribute to the community around you. I think it’s important that we find space to be part of a larger community, that we don’t just see ourselves as part of a nuclear family.”