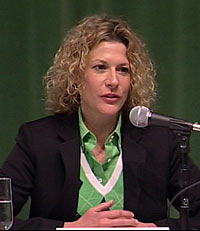 Kathryn Hinsch has always been fascinated with technology; she joined Microsoft in 1986 because she saw the potential for technology to change how we work and live. The emergence of biotechnology has been particularly fascinating for Ms. Hinsch because of its potential to change the way we think about being human.

Ms. Hinsch founded the Women’s Bioethics Project in June 2004 because of her concern that the rapid advance of biotechnology is quickly outpacing our ability as a society to absorb the affect it will have on our lives. From stem cell research to the Schiavo case, bioethics has created a whole new world of issues and questions.

Ms. Hinsch was particularly driven to include women’s voices and life experiences in debate and policymaking on bioethical issues because of how directly women’s bodies and roles are touched by them. She believes that women bring a vital perspective to all issues that affect society, and therefore it is critical for their perspectives to be included in all bioethical public policy and debate.

To that end, the Women’s Bioethics Project promotes the thoughtful application of biotechnology to improve the status of women’s lives. It also seeks to protect vulnerable populations by anticipating unintended consequences, safeguarding women’s bodies from harm and ensuring that women’s life priorities are recognized.

Ms. Hinsch worked Microsoft Corporation for 12 years prior to pursuing her passion for bioethics and its impact on women. At Microsoft, she was focused on systems software, development tools, and new media.  Her last position was as Senior Director of Worldwide Marketing for Windows CE. Before joining Microsoft, she worked in a variety of public policy and political positions.

Ms. Hinsch has a B.A. in Political Economy from the Evergreen State College and has completed all requirements for the Master of Science in Bioethics, as well as a certificate in clinical ethics, from Albany Medical College. Ms. Hinsch is an alumna of the Stanford Executive Program, a member of the Association of Bioethics and Humanities and the Neuroethics Society. She was pursuing a Master of Divinity degree, with an emphasis on bioethics, at Harvard University before taking a leave to found the Women’s Bioethics Project. She currently serves as the project’s executive director and board president.

She is an inspirational leader and someone that I think serves as a wonderful role model.  I hope you will consider her for this award, as she has had a huge impact on the lives of many women.