Hope you’re all relaxing today, at least for a little bit. Here are a few articles that seem fitting in honor of Labor Day …

– At Women’s eNews, Kate Kelly describes the work of Lillian Moller Gilbreth, also known as the Mother of Modern Management, who was an industrial engineer and a pioneer in creating work environments that met the needs of the disabled. This is the first I’ve heard of Gilbreth, a mother of 12, and continued to read more about her incredible life at Webster and Wikipedia. Gilbreth’s papers are at Smith College.

– From Plain Dealer columnist Connie Schultz: “Last week, in a 5-1 ruling, the highest court here ruled that an Ohio law that bans discrimination against pregnant women does not protect them from punishment for taking unauthorized breaks to use a breast pump after they birth those babies. And you thought we were a trendsetter only in presidential election years.” Read on. 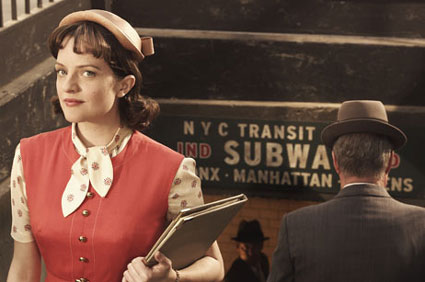 – “Mad Men,” my favorite TV show of the moment, offers a poignant look at the trials of women in the workplace in the early 1960s. The series is set at a growing ad agency on Madison Avenue (that’s copywriter Peggy Olson, played by Elisabeth Moss, above), and it’s full of cringe-worthy moments. Seven of the show’s nine writers are women, which Amy Chozick notes is a rarity in Hollywood television.

Joan Wickersham, who worked as a copywriter in a Boston ad agency in the 1980s, writes in the Boston Globe that “long after the 1960s, the workplace was still stuck in the same cultural blind spot satirized in ‘Mad Men.'” She shares this story of a client presenting prototypes of two computer games — the one targeted to boys involved building a railway empire; the one targeted to girls involved deciding where to put furniture in a house.

I suggested to the client that maybe the girls’ game needed a little more substance. The boys’ game was ambitious, intellectually challenging – couldn’t something similar be devised for the girls? Or maybe they didn’t need their own game. Maybe they’d be just as excited as the boys about building a railway empire. Maybe . . .

One of the men I worked with gave me a look. A look that said: “You’re being a pest, and a troublemaker. Shut up.’’

Boy version with Mom voiceover: “I can’t go to class with him. I can’t do his history report for him, or show the teachers how curious he is. That’s his job. My job is to give him everything he needs to succeed while staying within a budget…I love my job.” Cut to boy with his new affordable laptop. He’s getting applause from his teacher and the students in the class as he delivers a report.

Girl version with Mom voiceover:“I can’t go to school with her. I can’t introduce her to new friends.” Cut to girl nervously asking “Can I sit here?” to a group of girls sitting together at lunch. “Sure, I like your top!” one of them answers. “Or tell everyone how amazing she is. But I can give her what she needs to feel good about herself without breaking my budget. All she has to do is be herself.” Cut to smiling girls walking arm-in-arm down the hallway.

It appears that much work still needs to be done.