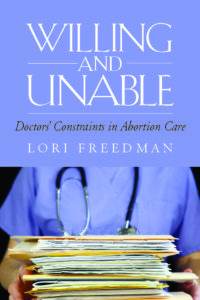 Last week, Christine blogged about a New York Times article, “The New Abortion Providers,” that provides a detailed look at “the struggles of individual medical students and doctors to make abortion an accepted, integrated part of healthcare.”

For those interested in an even more thorough exploration of this topic, Lori Freedman’s “Willing and Unable: Doctors’ Constraints in Abortion Care” is a great resource. In fact, the Times piece mentions Freedman, in the context of a study she co-authored.

In the study, researchers interviewed 30 OB/GYNs with abortion training who said they wanted to provide abortions after residency. Once they were in practice, though, most of the OB/GYNs were not providing abortions, and the study examines the professional, personal and social reasons why they weren’t.

“Willing and Unable” provides more detail on these discussions with providers, focusing on the providers who are trained to provide abortion and not opposed to the practice — the willing — but who for various personal and structural reasons are unable to do so.

Freedman discusses the isolation of abortion into freestanding clinics, and the physicians she interviews describe the barriers to integrating abortion into normal medical care in group practices and hospitals, including group practice owners, personal attitudes, fear of stigma, financial and professional vulnerability early in their careers, HMO referral rules, and Catholic hospital networks that have made them unable to provide abortion to patients.

Ninety-seven percent of non-metropolitan U.S. counties lack abortion providers, and dedicated abortion clinics currently provide 93 percent of abortion procedures. Looking at these statistics, Freedman concludes that “threats, overt abortion prohibitions, and a medical culture of practice that distances itself from abortion” results in a “multilevel, institutionalized buck-passing that marginalizes abortion practice.”

She explains that “ultimately, willing and even highly motivated physicians find the current organization of health care all but prohibits abortion practice within mainstream medicine.”

In some cases, providers were more ambivalent and simply did not feel a degree of personal responsibility for providing abortions that would lead them to tackle certain barriers and inconveniences that could be overcome. In other cases, however, the providers would have liked to provide abortion but were prevented from doing so by strict policies and conditions of their employment or other structural barriers.

Freedman examines not only the reasons for but the outcomes of these barriers — such as cases encountered by interviewees who currently work in Catholic hospital networks and have been frustrated by their inability to provide abortions, even to women whose pregnancies were clearly unsuccessful and, in some cases, life-threatening.

Freedman makes the following recommendations for advocates to move beyond increasing access to abortion training (a key focus in previous decades):

Overall, I found “Willing and Unable” to be a nuanced and fascinating exploration of the reasons why providers who are trained in and willing to provide abortions may not be doing so, which in turn contributes to the high percentage of U.S. areas with no local abortion provider.

While I have personally been more attuned to the issue of medical student training with regards to the provider portion of the access equation, Freedman’s work was quite informative in pointing out other important ways in which trained and willing physicians are currently prevented from reducing the provider shortage in the United States.

Readers may also be interested in this RHRealityCheck podcast discussion with Freedman, and two articles in the June 2010 issue of the journal Contraception by Freedman and her colleagues.

Note: “Willing and Unable” is published by my larger workplace’s university press, and I know the press’s marketing and new media staff.