A recent Boston Globe Magazine feature “The C-Section Boom,” written by obstetrician Adam Wolfberg, discusses the high rate of cesarean sections as well as the variable rate between providers and facilities, possible reasons for the high rate, and potential approaches for reduction.

Wolfberg believes that the factors that contribute to the high rates include doctors’ convenience, fear of litigation, overdiagnosis of fetal distress, and previous cesareans. One particular statement laid out the power dynamic operating in many birth situations with a clarity I’ve rarely seen:

The truth is, an obstetrician can persuade almost any patient at any time that a caesarean is the best choice. I could have told this woman that the transient dips in the heart rate concerned me and that I recommended surgery to prevent her baby from being harmed. Few patients, hearing those words, would refuse.

Letters in response to the piece point to issues not fully explored by Woflberg. In her letter with Gene Declerq, a professor in Maternal and Child Health and the assistant dean for doctoral education at the Boston University School of Public Health, OBOS co-founder and director Judy Norsigian writes that while Wolfberg says previous cesareans often lead to future cesareans, he does not describe changes in the official ACOG position (2010) on previous cesareans, which presumably will allow for more vaginal births – and which potential patients could benefit from being aware of.

Wolfberg also doesn’t really discuss potential adverse health effects of cesarean, focusing instead on institutional costs as a downside. Another letter-writer, Beth Shearer, raises these concerns and advises doctors to be as wary of surgical risks during unnecessary surgery as they might be of the legal risks of not doing cesareans. 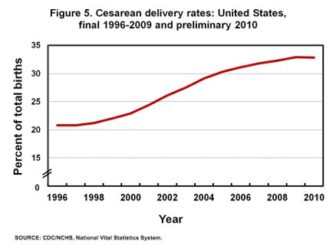