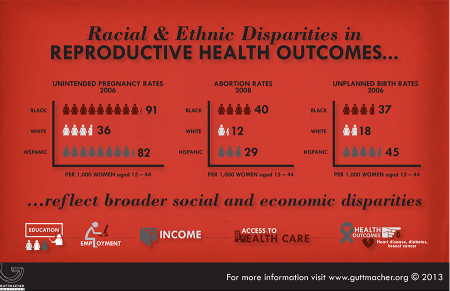 Although this January marks the 40th anniversary of the landmark Supreme Court decision legalizing abortion, we know that there is still much work to be done to ensure reproductive justice for all women.

The Guttmacher Institute reports that 2012 saw the second highest number of abortion restrictions enacted in a single year; the Center for Reproductive Justice addresses each state in this report.

Among the provisions ultimately defeated were “fetal personhood” bills in Mississippi and Oklahoma. But the notion that fetuses should be protected from the women carrying them has resulted in the restriction and punishment of women across America.

Lynn Paltrow, executive director of National Advocates for Pregnant Women, and Jeanne Flavin, a professor of sociology at Fordham University and chair of NAPW’s board, have put together an extremely interesting and important study: “Arrests of and Forced Interventions on Pregnant Women in the United States, 1973–2005: Implications for Women’s Legal Status and Public Health.”

Paltrow and Flavin (who is also the author of the 2008 book “Our Bodies, Our Crimes: The Policing of Women’s Reproduction in America“) tried to identify and examine U.S. cases from 1973, the year of Roe v. Wade, through 2005, in which a medical or government authority tried or succeeded in stripping a woman’s autonomy because of pregnancy. The study appears in the Journal of Health Politics, Policy and Law.

These cases could have involved threat of or actual arrest, incarceration, or increased prison/jail time; detention in a hospital, treatment program, or mental institution; or forced medical intervention. Descriptive detail of several cases is provided, along with summary statistics on the findings.

Looking at legal, medical and other sources, Paltrow and Flavin analyzed 413 cases, which they speculate are “a substantial undercount,” because cases were difficult to identify and some sources referred to additional cases.

The data reveals substantial racial, income and geographic disparities. While almost every state had multiple cases, the regions with the most were the south (56 percent) and midwest (22 percent). These cases disproportionately targeted black women (52 percent of cases overall, and 72 percent of cases in the south), and 71 percent involved low-income women (enough so that they qualified for indigent defense).

The authors explore how these disparities are interlinked with disparities in drug laws, disproportionate application of criminal laws, and outdated stereotypes about cocaine use (such as the “crack baby” myth).

The vast majority of the cases — 84 percent — involved allegations of illegal drug use. In the remaining cases, “women were deprived of their liberty based on claims that they had not obtained prenatal care, had mental illness, or had gestational diabetes, or because they had suffered a pregnancy loss.”

Although concern for the health of the fetus/infant is typically offered as a reason for increased scrutiny or detainment of pregnant women, in 64 percent of the cases there was no reported health issue cited in the allegation.

As the authors point out:

Due in part, no doubt, to the strong public health opposition to such measures, no state legislature has ever passed a law making it a crime for a woman to go to term in spite of a drug problem, nor has any state passed a law that would make women liable for the outcome of their pregnancies. Similarly, no state legislature has amended its criminal laws to make its child abuse laws applicable to pregnant women in relationship to the eggs, embryos, or fetuses that women carry, nurture, and sustain. No state has rewritten its drug delivery or distribution laws to apply to the transfer of drugs through the umbilical cord. To date no state has adopted a personhood measure, and no law exists at the state or federal level that generally exempts pregnant women from the full protection afforded by federal and state constitutions.

In other words, nothing about existing law should make women subject to such persecution. They also note that public health groups have observed that targeting pregnant women may lead to women avoiding medical care or having unwanted abortions to avoid increased and punitive scrutiny.

Paltrow and Flavin also highlight these cases in the context of proposed personhood laws, which would give fetuses individual rights and potentially could lead to increased prosecutions of women. They authors note that they have identified “more than two hundred cases initiated against pregnant women since 2005 that also overwhelmingly rest on the claim of separate rights for fertilized eggs, embryos, and fetuses.”

Opponents to personhood laws have cautioned that such measures could lead to forced medical interventions on pregnant women along with possible punishment for miscarriages and stillbirths. While personhood proponents often dismiss these warnings as scare tactics, the research shows there is good reason to be concerned.

Paltrow and Flavin conclude with a call for change:

In light of these continued efforts and our findings, we challenge health care providers, law enforcement and child welfare officials, social workers, judges, and policy makers to examine the role they play in the arrests and detentions of and forced interventions on pregnant women. We call on these same people to develop and support only those policies that are grounded in empirical evidence, that in practice will actually advance the health, rights, and dignity of pregnant women and their children, and that will not perpetuate or exacerbate America’s long and continuing history of institutionalized racism.

Finally, our study provides compelling reasons for people who value pregnant women, whether they support or oppose abortion, to work together against personhood and related measures so women can be assured that on becoming pregnant they will retain their civil and human rights.

The whole article is well worth a read if you can get a copy. The abstract is freely available online.