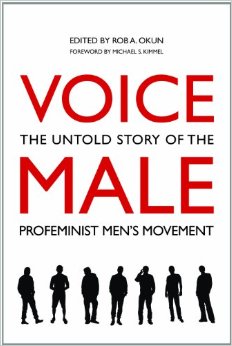 When I first started reading Voice Male magazine some years back, I felt a strong sense of appreciation and urgency about this magazine being widely read.

Here at Our Bodies Ourselves, we have long worked with male allies who share common values and goals, but too often their work has been under the radar — both both in terms of media recognition, and visibility within women’s and community organizations that would welcome them as collaborators.

We know some tremendous work is being done around issues of masculinity and, of course, in the arena of gender-based violence. Voice Male has been at the forefront of promoting these efforts.

As my colleague Jackson Katz has written, Voice Male is for the anti-sexist men’s movement what Ms. magazine has been for the women’s movement.

Now comes the new book, “Voice Male: The Untold Story of the Profeminist Men’s Movement,” in which the magazine’s editor, Rob Okun, introduces readers to, as he puts it, “one of the most important social justice movements you’ve never heard of — the social transformation of masculinity.”

It’s a welcome addition to the canon on gender justice. Tackling a topic as comprehensive as the pro-feminist men’s movement is a daunting task, especially when we consider the movement began in the late 1970s. Okun’s approach is both inviting and instructive.

I admit I’m biased (I reviewed the book before publication and provided advance praise), but outside reviews also have been excellent. Publishers Weekly has a good write-up, and Library Journal concluded: “A very worthwhile introduction to the profeminist movement among men. It will reward both casual readers and serious students of the subject.”

Following a forward by well-known sociologist Michael Kimmel, Okun uses the first chapter to tell the story of the movement, offering compelling highlights that bring to life its rich history. And, showing his activist roots (for many years he was executive director of the Men’s Resource Center for Change in Amherst, Mass., one of the earliest men’s centers in the country), he brings the narrative into the here and now, presenting short profiles of 20 of the most effective pro-feminist men’s organizations in North America, and a few overseas.

The next 11 chapters feature around 140 essays, articles and moving first-person stories by both men and women, some famous, some not, spanning three decades of the magazine. The writing runs the gamut — boys to men, men of color, GBTQ issues, fathering, men and feminism, men’s heath, male survivors, overcoming violence, what is healthy masculinity, and manhood after the school shooting in Newtown, Conn. The book includes nearly 15 pages of resources on all of these topics, and has nearly that many pages in a comprehensive index.

“Voice Male” will be eye-opening and inspiring to students in gender studies programs, and a powerful organizing tool for activist organizations. Hopefully, too, it will find its way onto the bookshelves in homes where anyone interested in social justice lives.

Please join OBOS in getting the word out about this new resource, and get a copy for every young man in your life.