You may have missed this front-page Washington Post story on Friday about our wonderful CIA handing out Viagra to aging Afghan tribal leaders:

“Take one of these. You’ll love it,” the officer said. Compliments of Uncle Sam.

The enticement worked. The officer, who described the encounter, returned four days later to an enthusiastic reception. The grinning chief offered up a bonanza of information about Taliban movements and supply routes — followed by a request for more pills. […]

In their efforts to win over notoriously fickle warlords and chieftains, the officials say, the agency’s operatives have used a variety of personal services. These include pocketknives and tools, medicine or surgeries for ailing family members, toys and school equipment, tooth extractions, travel visas, and, occasionally, pharmaceutical enhancements for aging patriarchs with slumping libidos, the officials said.

Problematic much? Consider the power trip:

“You didn’t hand it out to younger guys, but it could be a silver bullet to make connections to the older ones,” said one retired operative familiar with the drug’s use in Afghanistan. Afghan tribal leaders often had four wives — the maximum number allowed by the Koran — and aging village patriarchs were easily sold on the utility of a pill that could “put them back in an authoritative position,” the official said.

This response sums up, more succinctly than I could, why this is such revolting news:

Is the U.S. government “wholeheartedly committed to the full participation of women in all aspects of Afghan society,” as first lady Laura Bush stated on April 6, 2005? Or will women in Afghanistan continue to be sexual chattel to fickle aging and ailing warlords who can be bribed by American operatives so they can feel “back in an authoritative position”?

Or, if you prefer a visual response, check out Ann Telnaes’ animated cartoon (turn on your volume). 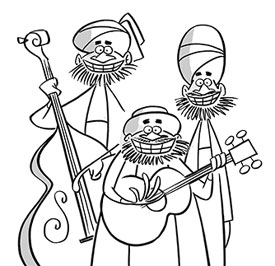