Wondering what health care reform means for you and your family? You may want to invite Raising Women’s Voices to your community for a special education session. From RWV:

We are bringing groups of experts into the community to meet with women, who often are the key health decision-makers for their families. Our aims are to explain the many ways in which health reform will help families — such as providing coverage for 32 million uninsured Americans — and to note the ways in which the law fell short, such as in covering abortion services and including undocumented immigrants.

Check out the list of available experts and topics to be covered. It seems like a wonderful opportunity to hear directly from women who can discuss individual and community-wide benefits and the nuances of the new law.  To learn more, email info [at] raisingwomensvoices.net

Last week, The New York Times Science section published an informative special issue on health care reform. The lead story, “What You Need to Know in the First Year” has an alternative title online that cuts to the chase: “What’s in it for Me?”

“The basic thrust of this law is that all of these nooks and crannies, all these gaps where private insurance has left you without any option, those are going to be taken away,” said DeAnn Friedholm, campaign director of health reform for Consumers Union, the nonprofit publisher of Consumer Reports. “It’s complicated, but it does establish a very key, important policy that you’re going to have options, regardless of your health situation or your employment situation.” 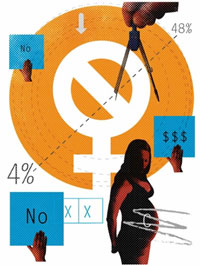 More specific to women’s health is an article by Denise Grady that looks at how health care reform will reduce costs associated with having double X chromosomes.

Among the major changes: Gender rating, the act of charging women more than men for the same insurance policy, even when maternity care is not included, is no longer allowed, and maternity coverage is now considered “an essential health benefit.”

“It has to be a part of the premium just like heart attacks, prostate cancer or any other condition,” said Marcia D. Greenberger, co-president of the National Women’s Law Center. The story continues:

Despite her enthusiasm for many aspects of the new law, Ms. Greenberger said she was profoundly disappointed in provisions that she thought would limit women’s access to abortion services.

Advocates for women’s health said one of the new law’s benefits would be to ban the denial of health coverage to women who have had a prior Caesarean section or been victims of domestic violence. Some companies providing individual policies have refused coverage in those circumstances, regarding Caesareans or beatings as pre-existing conditions that were likely to be predictors of higher expenses in the future.

In a statement issued Thursday, Senator Mikulski said: “One of my hearings revealed that a woman was denied coverage because she had a baby with a medically mandated C-section. When she tried to get insurance coverage with another company, she was told she had to be sterilized in order to get health insurance. That will never, ever happen again because of what we did here with health care reform.”

The success of health care reform will depend on the ability to control soaring health care costs, many experts have argued. Another story in the package looks at how the law will do little to curb unnecessary care, a subject that is also the focus of a piece published this week in the business section. David Leonhardt offers a concise explanation of a major obstacle: Convincing the public — and the medical community — that more care does not necessarily mean better care.

Managed care became loathed in the 1990s. The recent recommendation to reduce breast cancer screening set off a firestorm. On a personal level, anyone who has made a decision about his or her own care knows the nagging worry that comes from not choosing the most aggressive treatment.

This try-anything-and-everything instinct is ingrained in our culture, and it has some big benefits. But it also has big downsides, including the side effects and risks that come with unnecessary treatment. Consider that a recent study found that 15,000 people were projected to die eventually from the radiation they received from CT scans given in just a single year — and that there was “significant overuse” of such scans.

From an economic perspective, health reform will fail if we can’t sometimes push back against the try-anything instinct. The new agencies will be hounded by accusations of rationing, and Medicare’s long-term budget deficit will grow.

So figuring out how we can say no may be the single toughest and most important task facing the people who will be in charge of carrying out reform. “Being able to say no,” Dr. Alan Garber of Stanford says, “is the heart of the issue.”

For more on the economics of health care (and resistance to reform), read Atul Gawande’s piece in The New Yorker, which includes an excellent example of the effectiveness of preventative and comprehensive care — and the conundrum of costs.

Plus: Kaiser Family Foundation has published online a handy health reform implementation timeline that looks at when specific provisions of the legislation are scheduled to take effect. KFF also provides a summary of the new health reform law, breaking out key provisions by topic.

And Health and Human Services Secretary Kathleen Sebelius this week announced the appointment of five new HHS regional directors who will work with the states on implementing the Patient Protection and Affordable Care Act.