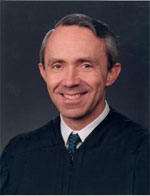 Factors in his decision no doubt include the election of President Obama, who would be more likely to appoint a successor attuned to the principles Souter has followed as a moderate-to-liberal member of the court’s more liberal bloc over the past two decades.

In addition, Souter was apparently satisfied that neither the court’s oldest member, 89-year-old John Paul Stevens, nor its lone woman, Ruth Bader Ginsburg, who had cancer surgery over the winter, wanted to retire at the end of this term. Not wanting to cause a second vacancy, Souter apparently had waited to learn his colleagues’ plans before deciding his own.

Given his first appointment to the high court, most observers expect Obama will appoint a woman, since the court currently has only one female justice and Obama was elected with strong support from women. But an Obama pick would be unlikely to change the ideological makeup of the court.

Back in February, in the wake of Ginburg’s bout with cancer, the Washington Post speculated on court retirements. The story noted that Souter had told friends he was tired of Washington and wanted to return to a scholarly life in his native New Hampshire. White House advisers were already working on a short list for the court in the case of a retirement this summer.

Among the names mentioned were former Harvard Law School Dean Elena Kagan, who Obama named as his solicitor general; Judge Sonia Sotomayor of the Court of Appeals for the 2nd Circuit; Judge Diane Wood of the 7th Circuit; and Stanford University law professor Kathleen M. Sullivan.

During his confirmation hearing, Judge Souter said he had no agenda on abortion and had not made a decision on how he would vote if the issue of Roe v. Wade was put before him. A major abortion case, Planned Parenthood v. Casey, arrived at the court in his second term and was argued on April 22, 1992. It was widely expected that Roe v. Wade would be formally or functionally overturned because by then another abortion rights supporter, Justice Thurgood Marshall, had retired, and he was replaced by Justice Clarence Thomas.

But the result was just the opposite. Justice Souter, joined by two other Republican-appointed justices, Sandra Day O’Connor and Anthony M. Kennedy, who had earlier both expressed strong doubts about Roe v. Wade, collaborated to produce a highly unusual joint opinion that reaffirmed the constitutional right to abortion. With Justices Harry A. Blackmun and John Paul Stevens joining the central parts of the joint opinion, the vote was 5 to 4.

Justice Souter was in the minority, and a bitter dissenter, in the case of Bush v. Gore, the 5-to-4 decision that ended the disputed Florida recount in the 2000 presidential election and effectively declared George W. Bush the winner.