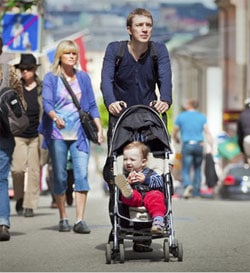 Nancy Chodorow’s “The Reproduction of Mothering” was an instant feminist classic when it was published in 1978. One of the most visionary conclusions was her call for men to take an equal role in the caretaking of children. If they don’t, she argued, women would grow up with a distorted perspective on their own relationships with men.

More than 30 years later, Chodorow’s call appears as challenging as ever — at least in the United States, where parental leave is still unpaid (putting us behind 177 nations, including Haiti and Afghanistan, that provide all women, and in some cases men, income and time off after the birth of a child) and only 12 weeks long, which discourages even willing men from taking over child-rearing duties.

Four years before the publication of Chodorow’s landmark text, however, Sweden had already become the first country to replace maternal leave with parental leave, and Sweden has continued to break new ground by spurring a revolution in male attitudes toward and male participation in childcare. Katrin Bennhold of The New York Times writes:

85 percent of Swedish fathers take parental leave. Those who don’t face questions from family, friends and colleagues. As other countries still tinker with maternity leave and women’s rights, Sweden may be a glimpse of the future.

In this land of Viking lore, men are at the heart of the gender-equality debate. The ponytailed center-right finance minister calls himself a feminist, ads for cleaning products rarely feature women as homemakers, and preschools vet books for gender stereotypes in animal characters. For nearly four decades, governments of all political hues have legislated to give women equal rights at work — and men equal rights at home.

Swedish mothers still take more time off with children — almost four times as much. And some who thought they wanted their men to help raise baby now find themselves coveting more time at home.

But laws reserving at least two months of the generously paid, 13-month parental leave exclusively for fathers — a quota that could well double after the September election — have set off profound social change.

Bennhold goes on to describe the positive effects of this change, such as a lowering of divorce rates and an increase in shared custody when a divorce does occur. It has undeniably transformed what it means to be a man.

Birgitta Ohlsson, European affairs minister, puts it in the terms of an old feminist maxim: “Now men can have it all — a successful career and being a responsible daddy. It’s a new kind of manly. It’s more wholesome.”

For more on how father’s leave in Sweden came to be so popular, read this side piece on politician Bengt Westerberg, who in the 1990s “championed the introduction of the first dedicated father month — 30 days of paid parental leave that could not be transferred to the mother — to encourage reluctant men like himself to do their bit and overhaul Swedish society in the process.”

Despite the fact that Sweden and other countries are far ahead of the United States when it comes to supporting fair and equitable childcare, it’s important to remember that progressives in the United States have been fighting for some form of paid parental leave for almost 100 years.

Yes, 100 years. As Sharon Lerner reminds us in the Washington Post:

As far back as 1919, when the Model T was switching from a crank to an electric starter, the U.S. government came close to signing on to an International Labor Organization agreement, supported by 33 countries, that said women workers should receive cash benefits in addition to job-protected leave for 12 weeks in the period surrounding childbirth. That same year, Julia Lathrop, the chief of the Labor Department’s children’s bureau, issued a report on international maternity leave policy in which she decried the United States as “one of the few great countries which as yet have no system of State or national assistance in maternity.” She had recently returned from Europe, where Germany and France had paid-leave laws that had been in place for decades.

The entire article is a very enlightening history lesson — revealing the twisted politics that have held back justice and common sense for far too long. For more on that subject, check out Lerner’s new book, “The War on Moms: On Life in a Family-Unfriendly Nation.”