Our Bodies Ourselves co-founder

How many readers know about the dramatic reach of the Our Bodies Ourselves Global Translation/Adaptation Program?

As one of the founders of the Boston Women’s Health Book Collective, and a writer and editor of “Our Bodies, Ourselves” for the past four decades, I am excited to discuss the reach of this amazing program.

Over and over again, it brings to life our original goal of women speaking directly with one another about their own experiences, and using this shared knowledge and wisdom to inform themselves, their families, and communities. It also reflects our goal of improving cultural attitudes toward women and initiating woman-centered national health policies.

Let’s start with what is happening in Nepal. The Women’s Rehabilitation Center (WOREC) has published the first three of seven health booklets based on “Our Bodies, Ourselves” and adapted to the needs of Nepalese women and girls. The group has tested the information in many settings across the country — with women in the community, the barefoot gynecologists who manage women-centered health clinics, activists and health ministry officials.

From grassroots to government, their project has had positive results. During a health fair in December 2007 organized by the gynecologists, 1,500 of the 4,000 women who attended volunteered to undergo self-examinations. WOREC was responsible for the inclusion of reproductive health in Nepal’s new interim constitution and helped develop a national health strategy focused on women. 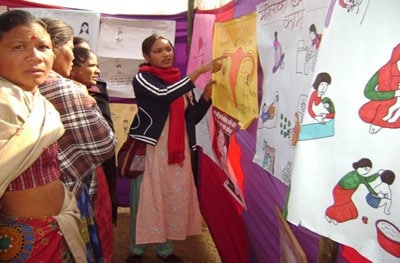 A WOREC health counselor sharing information from the Nepali OBOS booklets with women at the health fair / Photo by Jwala Kwolakshyapati, WOREC

This is just one example of how our Global Translation/Adaptation Program continues to realize OBOS’ original goals. The organization has facilitated adaptations of “Our Bodies, Ourselves” in 23 languages around the world. Projects are currently underway in seven countries, including Turkey and Israel, where a group of Jewish and Palestinian women are working together on two editions of “Our Bodies, Ourselves” — one in Hebrew and one in Arabic. (Find out below how you can help fund a specific translation/adaptation, or support a women’s group seeking start-up funds.)

Sally Whelan and Ayesha Chatterjee are the women at the heart of the program. Just as they remain in constant communication with WOREC’s project coordinator, Dr. Renu Rajbhandari, and offer their continuous support to WOREC in all of its efforts, they are in contact with dozens of women’s groups choosing to adapt “Our Bodies, Ourselves” as a national or regional project.

Once a group approaches OBOS, Sally and Ayesha listen to its needs and help plan the unique form their project will take — from start-up and adaptation to publishing, distribution and outreach.

They also encourage groups in each country to focus on building networks for their project, creating a “circle of friends” that includes laywomen, community groups, translators, reviewers, media contacts and policy makers. These networks can extend further geographically, as Sally and Ayesha put project coordinators from different countries in touch with one another to share strategies and experiences.

How do women incorporate this information and learn about their bodies? In all sorts of innovative ways relevant to their lives: books, booklets, magazines, posters, leaflets, workshops, websites, text messages and training sessions abound. Women gather in libraries, community centers, district councils, marketplaces and village hairdressers’ shops to share information. Outreach on motorcycles and other forms of local transport, such as canoes in Nigeria, bring simple health content to rural areas.

To support these efforts, the Global T/A Program counts on donations so it can continue to connect women throughout the world in the most lively, useful way, and build a global women’s movement despite tremendous odds.

In Nepal, WOREC often works under adverse conditions. More than 40 percent of the Nepalese population is under 25, which makes connecting with that age group essential to their vision. The team fights against the many forms of violence that women and girls face, including early marriage and sexual trafficking. Dedicated to promoting women’s health rights in a culture that is conservative and patriarchal, they are resilient in the face of humiliation, harassment and sometimes terrifying threats to their safety.

When WOREC launched the health booklets, government officials, health professionals and health and human rights activists spoke at a moving event about the needs of Nepalese women and families. The team also presented a gift basket of appreciation, filled with medicinal herbs, fruits and flowers, to the minister of Health and Population.

The best part of their work, says WOREC staff, will be when they actually begin using the booklets in the field. They plan to work with OBOS to strategize on publicity and expanded distribution for their materials.

I was lucky enough to attend the first conference of OBOS translators and adaptors in Utrecht, The Netherlands, in 2001. It was incredibly moving to sit around a large, oval table with women from Japan, Armenia, Poland, Tibet, Senegal, Mexico, Cuba, The Netherlands, Bulgaria and Serbia, and listen to their stories.

They shared what motivated them to write their own books, and how they had created, or were about to create, health materials appropriate to their own cultures. They described problems with language and discussions about which topics to include or leave out. Many national efforts encountered difficulties, ranging from repressive religious attitudes in Poland to an earthquake in Armenia.

They were also interested in the story of how “Our Bodies, Ourselves” began and has changed over the years, and were astonished to hear that it had been censored in the United States in a number of places.

The stories of our publications continue. What an adventure! In the coming months, we’ll share more tales and include the voices of women using “Our Bodies, Ourselves” around the world. We’ve also posted a video about the program on our new YouTube channel. Please take a look and let us know what you think.