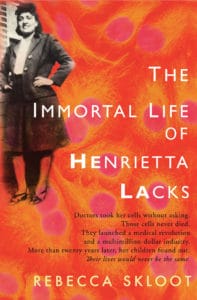 Earlier this week, I had the privilege of attending a talk by Rebecca Skloot, author of recently published book, The Immortal Life of Henrietta Lacks.

Henrietta’s cells were used in the development of the polio vaccine, were sent up in early space missions, and are mentioned in tens of thousands of research papers.

Rebecca Skloot’s book chronicles the history of Henrietta Lacks and her cells (dubbed “HeLa” cells), as well as Skloot’s  journey uncovering the story.

Lacks and her family never knew about the vast body of research that was being conducted using the cells, or even that the cells had been taken and used for research at all.  She and her family never benefited financially from the selling of HeLa cells. While Henrietta is long dead, her children and grandchildren still struggle to get medical care, and do not have health insurance.

In the course of her talk, Skloot read snippets of the book and discussed questions of ethics, race and class raised by the story. She talked about whether the family should be compensated, the kind of medical care Henrietta received in John Hopkins’s “colored” ward,  and the past and current use of cells and tissue from people’s biopsies and other procedures for later medical research (which may make money for biotechnology corporations). It was really interesting, and I highly recommend the book to anyone interested in these issues.

Skloot has established the Henrietta Lacks Foundation to fund scholarships and medical care for members of the Lacks family. The text of an interview earlier this year with Skloot on NPR’s Fresh Air is available here.