There is a striking lack of mainstream news coverage of the health hazards posed by beauty products, such as hair relaxers and skin lighteners, that are commonly used by black women. African-American women spend more on beauty products than white women do, but far too little research has looked at how women use these products.

So when the New York City-based WE ACT for Environmental Justice set out to survey African, African-American, and Latina women this year to find out how they use beauty products and what they know about them, it was an important step toward increasing awareness of a long-standing women’s health issue.

“We noticed that groups conducting surveys around this have focused on middle-class white women,” Ogonnaya Dotson-Newman, campaign director for WE ACT in Harlem, told The Uptowner. “But there is a whole area of hair products that you wouldn’t know about unless you live in certain urban areas.” 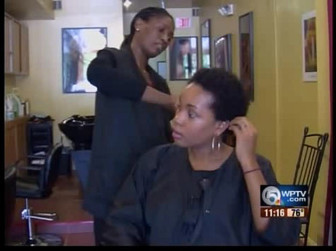 Straight hair has often — and unfairly — been an occupational requirement for black women. TV journalism is one of the most problematic fields (see the Maynard Institute’s historical view of “good hair” on the TV news). Reporter Rochelle Ritchie’s 2010 story (right) about going natural with her hair — and doing so publicly — made headlines and is included in the Body Image chapter in the new “Our Bodies, Ourselves.”

Keonte Coleman, an assistant journalism professor at Bennett College, has more on Ritchie’s backstory and decision to cut her hair on TV, and the standards to which black women in professional media positions are often held.

“Maybe there aren’t any guidelines preventing natural hairstyles, but there is a culture in place that fosters the need for black women to look like their white counterparts,” writes Coleman.

The ingredients of hair relaxers, which many black women use to straighten their curls, are anything but relaxing. Almost all of the samples of currently available hair relaxers tested by Environmental Working Group (EWG) were ranked highly toxic, although limited information was available. Allergic reactions, hormone disruption, immune system toxicity and organ toxicity were four of the main risks.

In contrast, hair straighteners, which are more commonly used by white women, have generally been considered to be relatively safer. EWG’s website shows most of these products are medium-risk with the highest concerns being allergic reactions, immune toxicity and hormone disruption. These risks are similar to those of the hair polishers which are used by women of color.

That was the thinking, at least, until 2010, when concern about formaldehyde in Brazilian keratin hair straighteners made headlines after salon workers in Oregon and internationally complained of breathing problems and eye irritation. Formaldehyde is an industrial chemical that can cause a host of health problems, including an increased risk of cancer.

In response, the FDA this year sent a warning letter to the makers of the hair straightening product Brazilian Blowout, which was found to contain formaldehyde even though it was labeled “formaldehyde free.” (The Campaign for Safe Cosmetics provides a timeline and status update since complaints were first lodged.)

It’s interesting that the formaldehyde in Brazilian Blowout drew criticism from the FDA, while the many ingredients in hair relaxers African-American women use have remained under the radar. These relaxers, as well as costly hair extensions, have been on the market for a long time.

Yumna Mohamed, reporting for The Uptowner, summarized some of the research on black women’s hair products:

While hair dyes, bleaches and relaxers have already been linked to skin problems (including rashes, burns, itching and hair loss), a number of national studies are being conducted to determine whether women of color face higher risks of breast and lung cancer from beauty product exposure.

Dr. Mary Beth Terry, a Columbia University epidemiologist, published a study in May in the Journal of Immigration and Minority Health showing that African-American and African-Caribbean women were more likely to be exposed to hormonally-active chemicals in hair products than white women, and used them more often.

“These products are often used daily and over the course of many years,” Terry says. “A number of these commonly-used products contain endocrine disruptors and placenta, and exposure to these could cause women to be more susceptible to hormone-sensitive diseases such as aggressive breast cancer.”

WE ACT expects to release its survey findings in January. It will use the information to lobby the cosmetics industry and advise women about the dangers in hair products.

Kat Friedrich is an environmental journalist whose work focuses on urban communities. She lives in Boston, uses Twitter, and blogs at Science Is Everyone’s Story.