The 15-year run of  “ER” ended last week, sparking a number of reflections and retrospectives.

Since I cover health, I especially appreciated this analysis of the NBC series’ influence on the representation of health care in television programming.

It was back in 1996 when The New England Journal of Medicine first took “ER” and other medical shows to task for performing CPR much more frequently — and with much greater success — than doctors do off-screen.

Within a year, the show’s writers, which then included an emergency room physician and a pediatrician who was the show’s co-producer, crafted a scene in which Dr. John Carter (Noah Wyle) broke an elderly man’s rib while performing CPR.

How off were the numbers? A 2006 New Yorker article noted that in reality one in 100 patients undergo CPR or some other resuscitation procedure. Just 15 percent, at most, are successful. On television shows, the success rate is closer to two-thirds.

“ER” has also been the medium for messages about HIV transmission, breast cancer, adoption, domestic violence, elder abuse and drug use. One of the final episode story lines revolved around a teenager who drank too much vodka at a friends’ home, providing Dr. Tony Gates (John Stamos) the opportunity to lecture that only 6 ounces of alcohol can be dangerous.

Adding another layer of real-life complication, the drinking was sanctioned by the friends’ parents. That now translates to “call the police.”

Writing in the Times, Pam Belluck describes the show’s powerful legacy as “a give-and-take between the world of entertainment and the world of medicine that has become stronger and more deeply intertwined with each year that ‘ER’ has been on the air, carrying over to other medical shows.”

One of the first hospital dramas to take its medicine seriously — as the engine rather than the backdrop for its scripts — “ER” caught the attention of the medical establishment as a source of health information for millions of Americans. A 2002 study by the Kaiser Family Foundation found that viewers’ knowledge of emergency contraception and the human papilloma virus increased after watching episodes that mentioned those subjects; a third of them said the show helped them make health care choices. One in five doctors in a 2001 survey said patients asked about diseases or treatments they saw on shows like “ER.”

Today, a small industry has grown up to influence writers and producers. A program called Hollywood, Health and Society gets money from health organizations and federal agencies like the Centers for Disease Control and Prevention to arrange meetings where doctors urge medical-show writers to highlight certain diseases or issues.

“We coach our experts in telling writers real stories of real people,” said Sandra de Castro Buffington, director of the program, part of the Norman Lear Center at the University of Southern California’s Annenberg School of Communication. 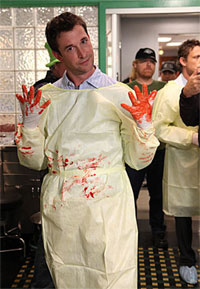 What I also find interesting about the “ER” postmortem is the shift in attitudes toward doctors. During the days of “Marcus Welby, M.D.,” physicians were revered for their medical skill and bedside manner. The American Medical Association even gave its approval to some shows, but the approval had less to do with medical accuracy and more with how the doctors were portrayed.

[A side note: For a terrific discussion about how “Marcus Welby, M.D.” reflected its time period, read this article by Joseph Turow at the Museum of Broadcast Communications. Turow recounts how it addressed medical topics, such as sexually transmitted infections, that up until then TV censors didn’t allow. The show was memorable in other ways: Gay rights activists, in one of their first organized protests against a TV show, criticized an episode about about the rape of a teenager by a male teacher. And women’s rights activists complained that “Marcus Welby’s control over the lives of his patients (many of whom were women) represented the worst aspects of male physician’ paternalistic attitudes.“]

“These were sort of adoring doctor dramas,” John D. Lantos, a bioethicist at the University of Chicago, told the Times. “My sense is that the medicine was irrelevant and unsophisticated — someone’s lying in a room that looks like your living room and there’s an IV running, the universal symbol that something medical is going on.”

That certainly wouldn’t fly today, when story lines can be fact-checked instantly and the accuracy of medical jargon and physical details is as important as character development.

Speaking of character development, “ER” was one of the few shows that featured strong, complex female characters almost every season. Most everyone I know stopped watching “ER” years ago, but I faithfully TiVo’d each week. I’ll miss the familiar characters, as well as the  newer ones, including Dr. Cate Banfield (Angela Bassett, who deserved more air time), and the ones we’ll never get to know, like Dr. Julia Wise (Alexis Bledel); I know, I know — I can’t believe either actress didn’t join sooner.

But mostly I’ll miss a show that indulged my health curiosity (and anxieties) and made the often arcane and intimidating world of medicine accessible, chiefly by showing that in the end, the characters that compose that world are as human as we are.

Plus: If you’re suffering from “ER” withdrawal, you may want to check out “Doctor’s Diaries.” The NOVA program, which broadcasts on PBS, has been following seven former Harvard medical school students for more than two decades. Pauline Chen has more. (Or you can try to convince me to watch “Grey’s Anatomy.”)