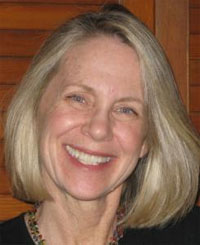 Pamela Morgan, one of the founders of Our Bodies Ourselves, died Nov. 17. She was 59.

Over at OBOS, we’ve posted remembrances by other founders who had the privilege of working closely with Pamela.

The first, by Norma Swenson, beautifully captures how many will remember Pamela. The second remembrance, by Miriam Hawley, describes her experience training for and running the Bonnie Belle 10K race with Pamela. Judy Norsigian recalls a special event underscoring one of Pamela’s many talents. Additional reflections may be posted in the future.

Pamela had been diagnosed with pancreatic cancer about a year ago. In an article published in the Newton Tab, Pamela’s husband, Jonathan Lilienfeld, describes her “special understanding of people,” and friends spoke of her drive to help others and her involvement in the lives of her sons, age 15 and 20. After learning of her diagnosis, Pamela got to work on home improvement projects.

“She wanted to make sure that if she wasn’t here, we’d be all set,” her husband said.

Pamela was a professional dancer and active in the First Unitarian Society in Newton. A memorial service will be held there at 2 p.m. Dec. 20.

The Boston Globe captures her role with OBOS:

Beginning in the late 1970s, Ms. Morgan worked for a decade with the collective whose book on women’s health has gone through multiple updated editions. Originally called the Boston Women’s Health Collective, the nonprofit changed its name several years ago to Our Bodies Ourselves – minus the comma that appears in the book’s title.

“In Our Body Ourselves, she wore many hats,” [Sally] Whelan said. “Pamela was a writer and editor of the book, and she was also our administrative manager.”

Judy Norsigian, executive director of Our Bodies Ourselves, recalled Ms. Morgan as “one of these extraordinarily multitalented individuals, and as a dancer, everything she did was with élan and flair.”

One of Ms. Morgan’s talents, Norsigian and Whelan said, was keeping things organized and helping the nonprofit grow beyond its early days.

“Along with the founders, she was absolutely key in moving Our Bodies Ourselves from its days as a collective with a groundbreaking book to a nonprofit organization with more infrastructure that would then be able to carry the work into the future,” Whelan said. “I think it often gets lost because everybody emphasizes the book – and rightfully so, because it was so groundbreaking. But Pamela helped it go forward.”

Said Norsigian: “She was a caring and attentive person and a great problem solver. We have a big name and a big footprint, but we’ve always had a tiny budget. Part of the reason for our success is because of people like Pamela.”

Ms. Morgan also helped the collective develop the women’s health and learning center, a program at MCI-Framingham that helped educate inmates at the women’s prison about nutrition, pregnancy, and other matters.

But for thousands of women who called the collective from other states and other countries, Ms. Morgan was the voice on the phone directing them to information and health resources.

“She was a terrific and easy communicator with women,” Whelan said. “Pamela was really genuinely interested in people and their stories and their issues. She would get on the line with someone and it was like she was talking with a friend.”