It’s been too long since I visited The Scholar & Feminist online, a webjournal published by the Barnard Center for Research on Women (BCRW), but I’m glad I chose now to get reacquainted. The current issue is “Religion and the Body,” and it’s well worth a visit.

Guest editor Dominic Wetzel asks in the introduction: “What role does gender, sexuality and the body play in producing the idea that religion, and particularly politicized religion, is equal to conservatism, while secularism is progressive?”

Originally posed during a 2007 conference, “The Politics of Religion and Sexuality,” the question frames this journal issue in both expected and unexpected ways. Divided into three parts, the issue tackles Science, Bodies and the Christian Secular; Islam, Bodies, Politics; and The Art of Queer(ing) Religion.

All articles can be read free online. The issue also includes a related reading list and online resources. And don’t miss the art gallery, featuring a provocative mix of video, mixed media, cartoons and photos. I was particularly struck by “Phallometer,” a deceptively simple piece by Ins Kromminga that captures the restrictive boundaries that define one’s sex.

Plus: BCRW is hosting a public event March 21 that readers in the New York area may be interested in attending. The focus is Karla FC Holloway 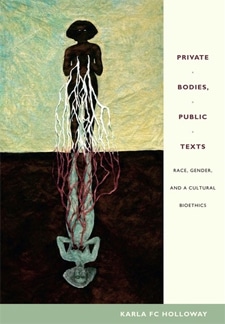 This important and groundbreaking work examines instances where medical issues and information that would usually be seen as intimate, private matters are forced into the public sphere, calling for a new cultural bioethics that attends to the complex histories of race, gender, and class in the US.

Holloway, the James B. Duke Professor of English and Professor of Law at Duke University, will take part in a conversation that also includes:

* Tina Campt, Professor of Women’s, Gender and Sexuality Studies and Director of the Africana Studies Program at Barnard College.

* Saidiya Hartman, Professor of Comparative Literature and Director of the Institute for Research on Women and Gender at Columbia University.

* Alondra Nelson, Associate Professor of Sociology and the Institute for Research on Women and Gender at Columbia University.