Stimulus Bill Makes Progress in Senate: Senate Democrats Friday night struck a deal with Republicans over the economic stimulus bill, paving the way for a vote early next week. The Senate and House versions will have to be reconciled, but House Democratic leaders aren’t thrilled with the Senate cuts, reports the Washington Post.

The Senate changes bring what had been a $920 billion package down to about $820 billion. Among the largest cuts: $40 billion from a $79 billion fund aimed at helping states preserve school funding as they try to balance their budgets. And negotiators cut in half $15 billion in “incentive grants” for states that meet certain goals for their initial education allotment.

Sex and the Stimulus: A proposal to allow states to extend Medicaid funding for family planning was nixed from the stimulus package last week, but conservative Republicans and some clueless members of the media were still using it Friday an example of unnecessary padding in the bill. 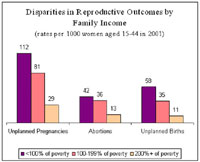 Writing in The New York Times Economix blog on Thursday, Nancy Folbre, an economics professor at the University of Massachusetts, Amherst, defended the proposal and explained what the economic benefits would have been.

“Increased spending on family planning (including contraceptives) would generate about as many direct and indirect jobs as any other health expenditures, and probably more than an equivalent tax cut. But the short-term effects are less important than benefits down the road,” writes Folbre.

“Ironically, the proposal that was originally part of the stimulus plan did not actually call for increased spending. It simply stipulated changes that would make it easier for states that wanted to expand their Medicaid-financed family planning services to do so. In other words, it would cut red tape,” Folbre adds. “That’s another economic benefit. But the Obama administration should look beyond the current stimulus debate to develop a long-run plan to increase public support for family planning.” Amen.

Daschle’s Gone, What’s Next?: Democrats don’t know who President Obama is going to pick to be secretary of Health & Human Services, a position that was all but former Sen. Tom Daschle’s before he withdrew from consideration over unpaid taxes.

“There were no other names,” an ally of the administration told the Washington Post. Still, there’s cautious optimism that the urgent need for reform will propel members of Congress:

For every one percentage point that unemployment rises, an additional 1.1 million people lose health insurance, said Karen Davis, president of the Commonwealth Fund, a private health research foundation. That means that health care, always a top concern of American voters, has risen on the agenda, she said.

Drew E. Altman, president and chief executive of the nonprofit Henry J. Kaiser Family Foundation, said that economic fears, Democratic control of both the White House and Congress, and the desire in the corporate world to rein in health costs are powerful forces in favor of reform.

But the recession could also sap the time or political energy to tackle it right now, Altman said. And if action is postponed until 2010, when members of Congress will be focused on their own re-election campaigns, the prospects will dim, he added.

One of the names mentioned this week as a potential contender for the HHS post is Tennessee Gov. Phil Bredesen, but health advocates are already criticizing the suggestion (see the action alert below). From Politico:

Driving the outrage is Bredesen’s 2005 decision to cut about 170,000 adults from Tennessee’s expanded Medicaid program. Bredesen’s past as a managed-care executive and continued ties to the health insurance industry haven’t won him many admirers within the progressive health reform community.

Of all the opposition research circulating Friday, one of the favorite nuggets among critics was the fact that BlueCross BlueShield of Tennessee, a company with major state dealings, donated $150,000 to the renovation of the governor’s mansion.

“A lot of elected officials are in bed with the insurance industry, but Phil Bredesen doesn’t stop there. He let them pay to redecorate his mansion. We can’t think of anyone more wrong for health care reform or more wrong for America,” said Jacki Schechner, spokeswoman for Health Care for America Now.

Speaking of Filling Open Positions …: Secretary of State Hillary Clinton’s decision last month to request the resignation of Mark Dybul, head of the Office of Global AIDS Coordinator, drew praise from some health advocates. Dybul was in charge of the President’s Emergency Plan For AIDS Relief (PEPFAR), which was accused of misspending millions of dollars on ideologically driven abstinence-until-marriage prevention programs.

Criticism of Dybul was far from unanimous, however. The San Francisco Chronicle was among those who argued that Dybul did a lot of good and was treated unfairly by the Obama administration.

It’s still unknown who will replace Dybul, though there is some speculation Clinton has already identified a successor. Meanwhile, a coalition of 68 HIV/AIDS organizations have asked Clinton to form a committee to identify candidates.

“That’s a sharp rebuke given the substantive role of the Clinton Foundation in global AIDS affairs,” writes public health expert Josh Ruxin. “At the same time, it’s a promising turn for the activists themselves. They’re insisting on transparency and a merit-based approach, well aware that the fight against AIDS globally cannot flag and will be with us for decades to come.”

Supreme Court Choices: We learned this week that Supreme Court Justice Ruth Bader Ginsburg has been diagnosed with pancreatic cancer. She is planning on returning to the court soon, but her illness sparked discussion of who Obama might consider for the nation’s highest court.

According to the Washington Post, there’s also some speculation that another justice might announce his departure this year. Advisers have already begin drafting a short list of replacements that is said to include Harvard Law School Dean Elena Kagan, who has been nominated to serve as solicitor general; Judge Sonia Sotomayor of the Court of Appeals for the 2nd Circuit; Judge Diane Wood of the 7th Circuit; and Stanford University law professor Kathleen M. Sullivan.

Senate Discovers Women: “The U.S. Senate is taking a welcome step: empowering a subcommittee specifically charged with global women’s issues,” writes Nicholas Kristof. “It’s the first time a subcommittee has had that mandate, and it will be led by Barbara Boxer of California, who will surely use her voice and spotlight to do some good on these issues.”