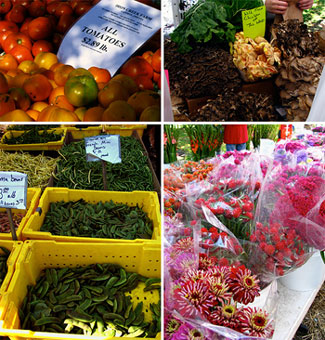 It’s mid-October, but the warm weather here in Chicago has me thinking we’re approaching summer. My small garden thinks so, too. Lettuce, basil, kale, peppers and chives are coming up strong, undaunted by the brown, crinkly leaves falling from the trees above.

Living in the city, planting space is limited and the season is (eventually) finite; I can’t rely solely on what I grow. But along with trips to the Green City Market downtown, and smaller farmers’ markets nearby, we probably eat locally grown produce for over half the year.

Of course, we are fortunate to have easy access to an abundance of fresh food choices. Huge swaths of Chicago are considered “food deserts” — in these neighborhoods, corner convenience stores and fast food restaurants greatly outnumber supermarkets, and access to affordable, healthy produce is severely limited by distance and cost.

Not surprisingly, residents in Chicago’s food deserts, the majority of whom are African American, experience a higher rate of diet-related illnesses (as a recent report shows), including diabetes, certain kinds of cancer and cardiovascular disease.

Support for urban agriculture is growing, along with a push to increase the number of farmers markets located throughout the city — a new market opened in Englewood, an impoverished South Side neighborhood, earlier this year. Yet affordability remains an issue. As this story points out, equipment is not available to process food stamp debit cards at all farmers markets, and even at markets with the equipment, not all vendors accept the cards.

Meanwhile, as Rachel has mentioned, the federal Women, Infants and Children program (WIC) is adding a paltry $8 a month for use at farmers markets by mid-2009 (read the latest here).

Despite increased public interest in farmers markets and community-supported agriculture (CSAs) that offer consumers a stake in a local farm, the relationship between food, health and the environment, as well as the importance of affordable and sustainable agriculture, doesn’t exactly make for a crowd-rousing stump-speech.

In fact, we’ve heard almost nothing from the presidential candidates about federal food policy, even as food prices keep rising. Perhaps that will change in the final weeks, but I wouldn’t bet my kale on it.

The political aspect hasn’t escaped Michael Pollan, however. The author of, most recently, “In Defense of Food: An Eater’s Manifesto,” Pollan penned an open letter to the president-elect that was published in The New York Times Magazine. It is perhaps the smartest and most engaging piece you’ll read this year on what a McCain or Obama administration should do to overhaul the way we grow food and radically change our approach to healthy eating.

Pollan begins by explaining, in no uncertain terms, the urgency:

[W]ith a suddenness that has taken us all by surprise, the era of cheap and abundant food appears to be drawing to a close. What this means is that you, like so many other leaders through history, will find yourself confronting the fact — so easy to overlook these past few years — that the health of a nation’s food system is a critical issue of national security. Food is about to demand your attention.

Complicating matters is the fact that the price and abundance of food are not the only problems we face; if they were, you could simply follow Nixon’s example, appoint a latter-day Earl Butz as your secretary of agriculture and instruct him or her to do whatever it takes to boost production. But there are reasons to think that the old approach won’t work this time around; for one thing, it depends on cheap energy that we can no longer count on. For another, expanding production of industrial agriculture today would require you to sacrifice important values on which you did campaign.

Which brings me to the deeper reason you will need not simply to address food prices but to make the reform of the entire food system one of the highest priorities of your administration: unless you do, you will not be able to make significant progress on the health care crisis, energy independence or climate change. Unlike food, these are issues you did campaign on — but as you try to address them you will quickly discover that the way we currently grow, process and eat food in America goes to the heart of all three problems and will have to change if we hope to solve them.

Pollan takes readers on a detailed yet easy-to-follow journey of how the United States food system developed the way it did — and what it can count as its chief success: namely, we produce cheap calories in great abundance.

He then offers an agenda for a 21st-century food system with specific proposals under three main sections: resolarizing the American farm; reregionalizing the food system; and rebuilding America’s food culture. His plan plan for a decentralized food system includes such essentials as modifying the food stamp program and expanding WIC:

Food-stamp debit cards should double in value whenever swiped at a farmers’ markets — all of which, by the way, need to be equipped with the Electronic Benefit Transfer card readers that supermarkets already have. We should expand the WIC program that gives farmers’-market vouchers to low-income women with children; such programs help attract farmers’ markets to urban neighborhoods where access to fresh produce is often nonexistent. (We should also offer tax incentives to grocery chains willing to build supermarkets in underserved neighborhoods.)

Federal food assistance for the elderly should build on a successful program pioneered by the state of Maine that buys low-income seniors a membership in a community-supported farm. All these initiatives have the virtue of advancing two objectives at once: supporting the health of at-risk Americans and the revival of local food economies.

The adventurous agenda includes suggestions for changing our relationship with food. For children, that means starting early: Plant gardens at every primary school, overhaul school menus and increase “school-lunch spending per pupil by $1 a day — the minimum amount food-service experts believe it will take to underwrite a shift from fast food in the cafeteria to real food freshly prepared.”

We also need to cease negotiating health messages with the food industry. Pollan calls for the surgeon general to take over the job of communicating with Americans about their diet. Currently it falls to the Department of Agriculture, which you might say has a conflict of interest.

But why not start at the top? In addition to encouraging the White House to go meatless one day a week, Pollan calls for the ultimate suburban sacrifice: tear out a portion of the White House lawn and plant an organic fruit and vegetable garden.

OK, insert your favorite arugula-loving-liberal joke here. But at another crucial point in history, White House support was influential:

When Eleanor Roosevelt did something similar in 1943, she helped start a Victory Garden movement that ended up making a substantial contribution to feeding the nation in wartime. (Less well known is the fact that Roosevelt planted this garden over the objections of the U.S.D.A., which feared home gardening would hurt the American food industry.) By the end of the war, more than 20 million home gardens were supplying 40 percent of the produce consumed in America. The president should throw his support behind a new Victory Garden movement, this one seeking “victory” over three critical challenges we face today: high food prices, poor diets and a sedentary population.

Eating from this, the shortest food chain of all, offers anyone with a patch of land a way to reduce their fossil-fuel consumption and help fight climate change. (We should offer grants to cities to build allotment gardens for people without access to land.) Just as important, Victory Gardens offer a way to enlist Americans, in body as well as mind, in the work of feeding themselves and changing the food system — something more ennobling, surely, than merely asking them to shop a little differently.

Read the whole piece (it’s well worth it!). Readers have posed interesting questions and suggestions in the comments, and the Times breaks out Pollan’s responses. Finally, here’s more good stuff from the “food issue.”

*Photo of scenes from Chicago Green City Market by schopie1, reprinted under a Creative Commons license.