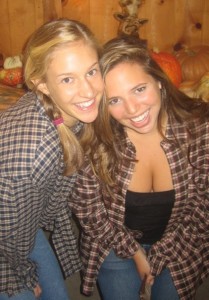 When I arrived at Kenyon College, in the middle of nowhere Ohio, I was another insecure freshman girl who hated her body and was afraid to speak out. Luckily, I happened to become involved with campus organizations filled with wonderful and powerful women who helped me find my voice and speak out against sexism and sexual assault, eating disorders and the thin ideal, and many other important feminist health issues. During this time, I met one particular woman who changed not only my life, but those of everyone around her.

At first I was intimidated by Shirley Kailas (left in photo), an outgoing, beautiful, smart and powerful feminist. She was the president of Epsilon Delta Mu when I met her, which, despite being a sorority, was one of the most active and most heard feminist groups on campus.

In addition, she was an important part of the Crozier Center for Women and the college’s women’s and gender studies department. I watched as she put together a “this is what a feminist looks like” campaign in response to sexism on campus, help organize Take Back the Night, and address sexual assault and eating disorders on campus.

It was not until I expressed my interest in starting a “Love Your Body” group that I got to know her personally. We began speaking about the increased amount of over-exercise and disordered eating on campus and decided enough was enough. The group flourished because of Shirley’s dedication and passion. She single-handedly brought Courtney Martin, author of “Perfect Girls, Starving Daughters,” to speak on campus, and over 200 people attended. In addition, she helped to lead and promote “Fat Talk Free Week” on campus and was a main proponent of Eating Disorders Awareness Week.

While her leadership in these campus-wide organizations and events is quite impressive, her personal influence is one of the main reason I am nominating her for this ward. I have watched her become a kind of respected counselor among friends. Women who have been sexually assaulted, who have developed eating disorders, or have friends with these issues, have begun to flock to her for guidance.

As an undergraduate, she has become a beacon of hope to women on this campus, and in her home of New York City — something that many of us cannot claim to have done in a lifetime. I have no doubt that she will one day be featured in the news for her accomplishments to women’s health, as she has already had a major effect on the attitudes and health of the women on Kenyon College’s campus. Thus, I nominate her for this award, to acknowledge what she has done and what she will do for women everywhere.