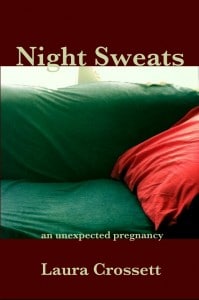 I’d recommend it on the merits alone, but here’s another reason: Laura is donating half of her proceeds from book sales to Our Bodies Ourselves.

Crossett describes her experience as a 35-year-old single woman — one month into a relationship and six months into a new job — facing a very unplanned pregnancy.

As the book description notes, her predicament is not uncommon, though her story is:

Almost half the pregnancies that occur in the United States each year are unplanned. Some of them happen to married women, some to unmarried; some occur due to failure to use contraception; some due to contraceptive failure. Some happen to women who hope one day to have children; some to women who never wanted children at all.

In a political climate that polarizes around issues of sexuality and choice and a popular culture that glamorizes pregnancy and fetishizes motherhood, we rarely hear the stories of women who did not seek to become pregnant. Night Sweats is one of them.

Despite the serious nature of her situation, there are some really funny bits in “Night Sweats” that made me chuckle. Discussing how pregnancy books assume certain kinds of family structures and access to resources, Crossett writes: “It’s like 1952 in pregnancy books, only with organic baby food and no BPA.”

The book is structured around the church year of the Episcopal Church, but if you are unfamiliar with its traditions (as I am), it’s not confusing (or preachy). Crossett is very straightforward about considering abortion when she learned of her pregnancy, and it’s interesting to explore her thought process.

We know that more than 70 percent of women seeking abortions are religious, but we don’t always get to hear these everyday stories amid the political rhetoric around the procedure.

You can purchase “Night Sweats” directly from Crossett if you happen to be in the Iowa City area, or you can buy it online:

In the acknowledgements, Crossett cites “Our Bodies, Ourselves: Pregnancy and Birth,” along with Ina May’s “Guide to Childbirth,”as “the best books” she has read on the subject.

During an email exchange, Crossett expanded on her appreciation for OBOS’s approach: “I picked up the ‘Our Bodies, Ourselves Pregnancy and Childbirth’ book (I’ve always been a fan of OBOS), and there, finally, was a book that never made an assumption. It talked about planned and unplanned pregnancies and people of color and GLBTQ people and people with mental illness and addiction and people who’d been raped and people with partners and people without — it was just so great.”