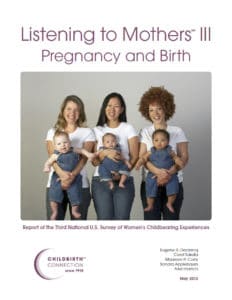 Childbirth Connection, a nonprofit organization that produces evidence-based information and resources on pregnancy, labor and birth, and the postpartum period, has released its third major survey on the experiences of childbearing women in hospitals across the United States.

The results of Listening to Mothers III provide insights into numerous issues, including childbirth education; the use and need of government services such as the Special Supplemental Nutrition Program for Women, Infants and Children (WIC); medical interventions during birth; provider choice; and health disparities.

The 2,400 women who completed the online survey were 18-45 years of age, gave birth in a U.S. hospital to a surviving single baby at some point between July 1, 2011 and June 30, 2012, and could participate in English. The research firm Harris Interactive collected the data.

Among the findings, the number one factor driving a woman’s choice of maternity care provider and hospital was acceptance of her health insurance plan. Insurance compatibility ranked higher than  recommendation by a provider, friend or family member, and higher than familiarity due to a previous birth.

Only about half of the women ever saw information that allowed them to compare the quality of potential providers and hospitals, but when they did have that information, 80 percent used it as a factor in their decision.

Pregnant women reported difficulty communicating with their providers at times — 30 percent said that at least once they had let a question go unasked because their provider seemed rushed, and 15 percent reported that their prenatal care provider “always” or “usually” used medical words they did not understand.

The survey provides a variety of data about various medical interventions, including induction, mode of birth, pain relief, labor support.

Close to one-third (31 percent) of survey participants had Cesarean-sections, which is pretty similar to the overall national rate.

There are a number of data points that suggest practices that are not evidence-based or are otherwise problematic, including hospitals not allowing VBAC attempts, somewhat high (17 percent) rate of episiotomy, reports of pubic hair shaving (10 percent for vaginal birth), c-sections performed because the provider had concerns about the baby being too big, and providing formula samples/coupons to moms and bottles with formula or water to babies, even when the moms wanted to exclusively breastfeed.

While it’s not clear how accurately the provider rationale and medical interventions were self-reported by the women, they’re worth a look for women’s perspectives on their care before, during and after childbirth.

The report includes women’s stories about these interventions, and the sometimes-poor communication they experienced with their providers. One respondent commented: “I was not told that I was going to need an episiotomy, and it was done without my permission. I just would have liked to know what an episiotomy was, why it happens, and what it’s like to deal with and take care of after giving birth.”

Another woman reported: “I felt bad because the doctor delivering my baby didn’t give me details. He just told me my baby was in danger and that I needed a c section. I believed him because I care about my baby.”

A companion report, “Listening to Mothers III: New Mothers Speak Out,” will explore postpartum experiences and further explore childbearing and maternity care. It is expected to be released later this month.