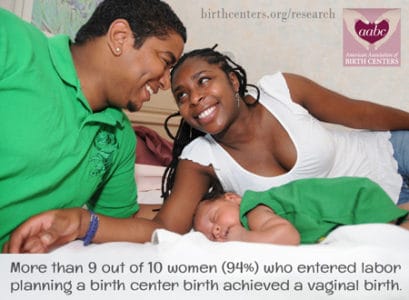 Many women, however, wish to give birth in an environment that is more homelike, or want to reduce their likelihood of experiencing many of the interventions that have become very common in hospitals, such as continuous electronic fetal monitoring, induction of labor, and cesarean section.

Of the non-hospital births documented in 2009, 27.6 percent (just over 12,000 births) took place in freestanding birth centers — an option for women  interested in giving birth with trained professionals outside of hospital obstetrics units. At birth centers, midwives generally provided prenatal, birth and postpartum care.

Now, there’s a large new study showing that birth centers are a safe option for both mothers and babies, reaffirming safety findings from previous research.

The study, published in the Journal of Midwifery & Women’s Health, looked at data from U.S. birth centers to assess outcomes for women and babies, including the need for a hospital transfer, mode of birth, complications, and deaths from 2007 through 2010.

The study gathered data from member organizations of the American Association of Birth Centers; 79 birth centers took part, with 59 of those sending data for the complete study period. The analysis included 15,574 women who planned and were eligible for a birth center birth at the onset of labor.

What does “eligible” mean in this context? Pregnancies considered medically low-risk: single-baby deliveries; pregnancies that went to full-term; and no breeches or medical/obstetric risk factors that required cesarean, continuous electronic fetal monitory, or labor induction.

There are some things the study can’t tell us, such as the outcomes at non-AABC birth centers and at AABC centers that don’t report their data to the AABC registry, and outcomes for women attempting vaginal birth after a prior cesarean (because most birth centers do not support it).

The NBSII study found a rate of 6.1 percent for cesareans. The authors looked at the cost savings related to reducing cesareans, and conclude, “Had this same group of 15,574 low-risk women been cared for in a hospital, an additional 2,934 cesarean births could be expected.”

They base this comparison on national rates of cesareans in low-risk women, currently reported at 26.5 percent (derived from data reported on birth certificates).

I had some questions about whether the 26.5 percent figure was the best comparison group (versus older data with a lower rate), so I emailed the study authors, who responded: “It is not a perfect comparison, because this pool of low-risk women from birth certificate data may not be as stringently selected as women screened for birth center eligibility. But it is the best estimate we have for low-risk women being cared for in hospitals.” [We can discuss this issue in more detail in the comments if anyone is interested.]

There were no maternal deaths recorded in the study, and low fetal/neonatal death rates — the researchers found an intrapartum fetal mortality rate for women who were admitted to the birth center in labor of 0.47/1,000, and a neonatal mortality rate excluding lethal anomalies of 0.40/1,000. From this, we can conclude that AABC birth centers are a reasonably safe choice for low-risk women.

On Feb. 13, the American Association of Birth Centers and the American College of Nurse-Midwives are holding a Congressional briefing focused on the role of midwives and birth centers in potentially affecting health care costs and outcomes (such as cesarean rates). More information and registration are available here.

For more information, here a Q&A about the study. Visit Science & Sensibility for an interview with one of the study’s authors.

Plus: “It took more than two decades of labor,” writes Julie Deardorff in the Chicago Tribune, “but Illinois is finally poised to permit its first free-standing birth center, an alternative model of care for low-risk pregnant women who want to deliver in a homey environment with a reduced chance of medical interventions.”

Read about the pilot program and steps supporters took, along with the Illinois Department of Public Health, to negotiate with hospitals and doctors.