The Society for Assisted Reproductive Technology has released new data on in vitro fertilization (IVF) use in the United States during 2012, and the numbers are up — way up.

The organization, which represents IVF providers, reports that more than 165,000 cycles of IVF were performed in 2012, making it the biggest year ever in terms of both IVF procedures and the resulting babies born. By comparison, doctors performed about 113,000 cycles in 2003.

More than 61,000 babies were conceived using this technology in 2012, amounting to about 1.5 percent of the 3.9 million births that year.

Another number is on the decline: the number of high-risk multiple births from IVF.

“If we dig deeper into the data, there has been a marked reduction in triplets,” Charles Coddington III, an OB-GYN at the Mayo Clinic in Rochester and president of SART, told NPR. “Everyone is really attuned to reducing triplets.”

In 2003, women between the ages of 35 and 40 had about a 6 percent chance of having triplets during a successful IVF procedure. Now the odds have dropped to 0.7 percent.

The reason for the decline, Coddington says, is that couples and their doctors are choosing to use fewer embryos during each cycle. “It isn’t across the board,” Coddington says. “There are still outliers. But the trend is really good. So we’ve had a better year in terms of triplets.”

The chance for twins is also less than it was a decade ago. But the rate is still high, especially for women younger than 40. About a quarter of all successful IVF cycles for women in this age group resulted in twins during 2012, the study reported.

The problem with twins and triplets, Coddington says, is that they raise the health risks for both moms and babies.

Single embryo transfer is the most effective way to reduce riskier multiple births.

Unfortunately, as the newly released numbers show, many cycles of IVF never result in a baby. 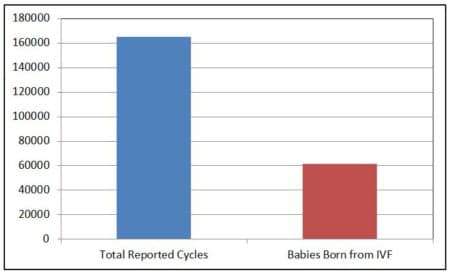 Miriam Zoll, an Our Bodies Ourselves board member and author of “Cracked Open: Liberty, Fertility and the Pursuit of High Tech Babies,” noted in a Reuters article this week that women over age 35 have higher percentages of failures with IVF and that “these treatments have consistently failed two-thirds of the time since 1978,” when the first “test tube baby” was born.

For more information on IVF and related issues such as egg donation, surrogacy and related topics, read our blog posts on reproductive technology, including “What’s Wrong With Fertility Clinics and Online Advertising” and “Truth in Medicine: Vast Majority of Assisted Reproductive Technologies Fail.”