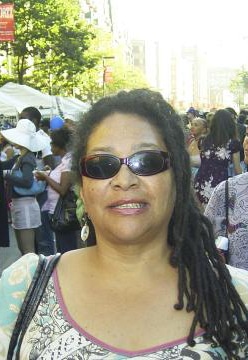 I first remember Lula Christopher sitting a silent vigil during my first mammogram after a clinical breast exam revealed some troubling lumps. I was impressed that she was there on a Saturday, at this special program for uninsured women.

I was so afraid and isolated among strangers. Seeing her calm, beautiful face had a tremendous impact on my well-being that day. Later she seemed as genuinely pleased to learn they were benign as I.

From that point in 1998, Lula Christopher has been my touchstone for Black women’s health issues and women’s health in general.  Lula gives freely of her time, talents and treasures to assist others to grow and mature.  She is a tremendous leader in that she invests in developing other women into leaders.

She’s my sistah-friend and a great friend to the community at large, keeping us abreast of developments in women’s health on a broad range of issues.

In 2000, Lula joined a very grassroots effort to organize a team of women to build a float for that year’s Caribbean Carnival with a breast health theme.  Although I didn’t seek it, I was appointed chair of the committee. I was still learning to cope with cognitive delays from a recent hysterectomy. Real or not, I felt my thinking process was extremely slow and that at times some of the women were making fun of me.

Though I wanted to resign and go home in defeat, Lula supported me to think through and process what was needed of me.  From budgets to crafting chants to inspire the crowd to support the women in their lives to get annual clinical breast health exams, to identifying sources for giveaways (including some Mardi Gras themed beads that teach women to identify what lumps feel like!), Lula was there.

When disaster stuck me during Carnival and I fainted from dehydration, it was Lula who gave up her day at Carnival to bring me to the Emergency Medical Team Tent. It was Lula who spent hours at her house nursing me back to health until I could be safely escorted home. Then, I learned later she had to go back home and prepare for a major presentation to a funder that was due the next week. Lula Christopher is a Servant Leader and deserves your award.