Back in 2007, we reported on the release of a devastating report from the American Psychological Association’s Task Force on the Sexualization of Girls. Its findings about the impact of sexualized images on young women weren’t necessarily revelatory for long-time activists, but the thoroughness and precision with which it outlined the cultural crisis provided a renewed foundation of evidence and authority.

Inspired by the report, a coalition of organizations — Hardy Girls Healthy Women, TrueChild, Women’s Media Center, Hunter College and the Ms. Foundation for Women — is convening the SPARK Summit: Challenging the Sexualization of Girls and Women, on Oct. 22 at Hunter College in New York City. 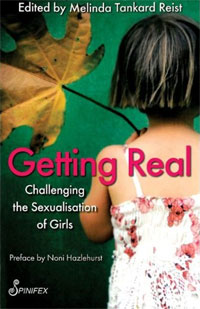 The event will include “girls and media professionals, thought leaders and funders, researchers and activists” and “serve as a national call to action and campaign for change.”

You can follow the build-up to the summit on Facebook and on Twitter (@SPARKsummit). You can even help decide on the meaning of the SPARK acronym by voting on the Hardy Girls blog.

A recent collection of essays out of Australia, “Getting Real: Challenging the Sexualisation of Girls,” edited by Melinda Tankard Reist, also strikes a tone of urgency in its insistence that the problem is only increasing and activism must rise to meet it.

Noni Hazlehurst writes in the preface:

The insistent and ubiquitious presentation of this unbalanced view of the world is nothing less than a form of child abuse. Why is it we kick up such a fuss about junk food and obesity, but are unwilling or unable to tackle the lack of quality sustenance for child’s minds and spirits? […]

In my view our children’s imaginations are dying. Their sense of themselves as worthy, strong individuals who are valued because they are unique is constantly being undermined. Only a few can withstand that sort of pressure. And very few will be in a position to be encouraged to be different, as many of today’s young parents don’t remember when there were alternative ways of looking at the world and other ways to value an individual’s noteworthiness.

Media critic Jean Kilbourne, among others, provides a rousing endorsement of “Getting Real” — and Kilbourne has just updated her landmark film series, “Killing Us Softly,” on the same subject. “Killing Us Softly 4” can be previewed and purchased at Media Education Foundation. From the film’s description:

The film marshals a range of new print and television advertisements to lay bare a stunning pattern of damaging gender stereotypes — images and messages that too often reinforce unrealistic, and unhealthy, perceptions of beauty, perfection, and sexuality. By bringing Kilbourne’s groundbreaking analysis up to date, Killing Us Softly 4 stands to challenge a new generation of students to take advertising seriously, and to think critically about popular culture and its relationship to sexism, eating disorders, and gender violence. 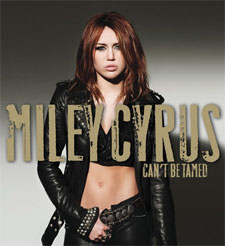 Despite the availability of all these resources and the continual, varied calls to action, however, many young women on the frontlines of this cultural crisis remain conflicted and confused, caught in an impersonal media machine. Possibly the most prominent example of this struggle is, yes, Miley Cyrus.

In his review of her latest album, “Can’t Be Tamed,” Jon Caramanica of The New York Times discusses the difficulty 17-year-old Cyrus has coming of age as a woman and an artist, negotiating her well-established Disney “Hannah Montana” identity and her need to assert her adulthood.

In her now infamous 2008 Vanity Fair photo shoot (remember the outcry — and response to the outcry?), and in the literally wild video for the title track of her new album, the seemingly inevitable sexualization of her image is well underway.

But Caramanica sees a much more hesitant and haphazard construction of identity. Instead of solidifying a new sexualized Miley, the album as a whole reveals the “frayed seams of her identity”:

Ms. Cyrus’s metamorphosis isn’t nearly as radical as “Can’t Be Tamed” — the title track, the video, the title — would suggest. Rather, she’s evolving into something far less controversial: a pop star, confused like all the rest of them.

This confusion is most clearly evident in one of the later songs:

On “Permanent December,” written with Claude Kelly — who also helped write “Party in the U.S.A.” — Ms. Cyrus tries out a sneering type of sing-rapping, à la Fergie: “Don’t call me a Lolita/’Cause I don’t let ’em through.”

On a more coherent album, that idea would be explored further. But the fact that Ms. Cyrus feels little need to assert her sexuality, or lack thereof, is consistent with her rejection of a single new identity in favor of a cluster of experiments. Perhaps she hasn’t had time to think it through, or maybe she’s realized that evading the subject for now is a more flexible strategy than tackling it head-on.

Of course, presuming that Miley’s original Disney identity didn’t involve its own form of sexualization would be naive. And I’m not just talking about the crazy Mickey Mouse underwear ads that debuted in China a couple of years ago, or the “dive in” underwear for girls that Disney wrote off as an “oversight.”

Last month, according to the Orange County Register (more here), the YWCA of Australia sought “a PG rating for tween magazines Disney Girl, Barbie Magazine and Total Girl, saying that the publications teach young girls that their bodies need to be improved upon.”

UPDATE: The New York Times reports that young fans of Miley Cyrus aren’t super thrilled with her new path. Also, see the comments for great information about the Healthy Media for Youth Act, H.R. 4925. The Girl Scouts is a strong supporter.