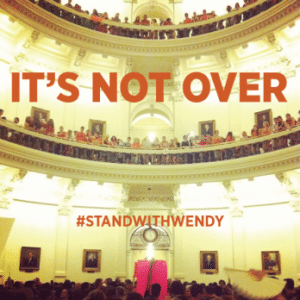 Following up on the amazing filibuster by Texas State Sen. Wendy Davis, Republican Gov. Rick Perry has called for a second special session, beginning today, in which he hopes to push through abortion restrictions.

Texas Tribune will once again provide livestreaming; here’s a seating chart for understanding who’s who in the state Senate.

For continued updates, follow the Twitter accounts of scATX and naraltx and the hashtag #standwithTXwomen. There’s also a virtual march event page on Facebook and a livestream of the rally outside the Statehouse.

For more good commentary from Texas that helps to put the Davis’s filibuster in context, read these columns from the Texas Tribune: “‘Ruly Mob’ Was Prompted by Civic Duty” and “Protest Caused by Unruly Bunch in Control.”

Texas is not the only state suffering from anti-abortion attacks. Mississippi is implementing a law that will make it much harder for women to have medical abortions. The law requires women to take the necessary pills in the presence of a doctor and schedule a mandatory follow-up a couple of weeks after the abortion.

In Ohio, Gov. John Kasich, flanked by a group of white male legislators, signed a state budget Sunday evening that included several abortion-related laws, including measures to strip funding from Planned Parenthood, divert money to right-wing crisis pregnancy centers, and defund rape crisis centers that provide women with information about abortion services. (You might recall that the Supreme Court last week decided the U.S. government could not refuse funding for global programs that do not take an anti-prostitution pledge; it will be interesting to see if Ohio can block funding for programs that share information about legally available options for rape survivors.)

Today’s Women’s Health Policy Report has more news about other states, including North Carolina. And the Guttmacher Institute has an overview of the new wave of laws intended to shut down abortion providers and seriously restrict access. It’s going to be one long, hot summer.