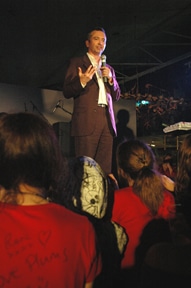 Dr. Tito Lopes is the lead Gynaecological Cancer surgeon at the Royal Cornwall Hospital here in the UK. He heads an amazing team who work hard to deliver the best possible care in Cornwall, and we know we are blessed to him have.

Tito’s skills take him worldwide where he shares his knowledge with those who know him to be a master in his chosen field; they watch his surgery and learn. He has held extremely important posts in the UK, including being President of the Gynaecological Society. He is recognised as a pioneer in his work and held in high esteem in the world of gynaecology.

Not only is Tito an expert, he is also an inspirational man to the women he cares for, who all love him. I speak to many of the women he has performed surgery on, since they come to my website for support, or telephone me, or attend educational days where he, and the team, are guest speakers. They are fulsome in their praise of him and find his kindness overwhelming. He listens, and gives hope, and as a survivor of gynaecological cancer myself and one of his patients, I know how important that is.

When I began PANTS, a charitable organisation raising awareness of gynaecological cancer, Tito became involved and, along with his team, have been willing to take part in everything I have suggested to raise awareness. This included the entire team appearing in their pants for PANTS in the Calendar I produced for 2009. By doing this they showed empathy to the women in their care, and helped to sell calendars and raise much needed funds.

He and the team come to educational days, and concerts and recently at Eden Rocks for PANTS, Tito spoke to the young people to encourage them to take care of their gynae health.

The ground had rocked with the gig that evening as Rosie and the Goldbug headlined an amazing event, along with local young bands. It was  made all the more amazing by Tito using that soundbite opportunity to engage with the young people. It has been my aim since beginning to raise awareness of gynae cancer, to target young people, since being in contact with women around the world who have died of gynae cancer, largely through ignorance of their bodies and the signs and symptoms of these awful cancers.

Recovering from my own endometrial cancer, I realised how much ignorance there was in so many women, but it is the young lives snuffed out which most affected me. And here was Tito talking in a way that made the young people listen, and it was as if all those who had died were cheering from heaven!

Tito Lopes is a blessing for women, and their families who have gynae cancer, and works tirelessly to raise awareness and improve the care women receive. He is so deserving of the recognition your award would give him.