Earlier this month, The Boston Globe published a story that deserves special mention before resuming our holiday break.

The story starts by comparing identical twins, two boys who grew up with distinctly different personalities and interests. As Bella English writes:

Jonas was all boy. He loved Spiderman, action figures, pirates, and swords.

Wyatt favored pink tutus and beads. At 4, he insisted on a Barbie birthday cake and had a thing for mermaids. On Halloween, Jonas was Buzz Lightyear. Wyatt wanted to be a princess; his mother compromised on a prince costume.

You see where this is going. What makes it a must-share read is the family’s forthrightness in discussing the difficult decisions they made to ensure Wyatt, now 14 and named Nicole, is able to grow up in a world in which she feels loved, safe and welcomed.

Having read so many superficial or gee-whiz stories on transgender children and adults, this one will be remembered for its honesty and emotion, especially coming from Nicole’s father, Wayne, 53. Here’s just one example:

Last winter, Maine state representative Kenneth Fredette, a Republican from Penobscot County, sponsored a bill that would have repealed protections for transgender people in public restrooms, instead allowing schools and businesses to adopt their own policies. The bill was a response to the Maines’ 2009 lawsuit against the Orono School District.

Last spring Wayne and Nicole roamed the halls of the State House, button-holing legislators and testifying against the bill. “I’d be in more danger if I went into the boys bathroom,’’ Nicole told the lawmakers, who ultimately rejected the bill.

“She knows how to work a room,’’ her father says proudly. “She even convinced a cosponsor to vote the other way.’’

In October, the family was honored for its activism in helping defeat the transgender bathroom bill. The Maineses received the Roger Baldwin Award, named for a founder of the American Civil Liberties Union, from the Maine chapter of the ACLU.

Surrounded by Kelly and the kids, Wayne told the audience that he and his wife have had top-notch guides as they confronted the unknown.

“As a conventional dad, hunter, and former Republican, it took me longer to understand that I never had two sons,’’ he told them. “My children taught me who Nicole is and who she needed to be.’’

Go read the whole thing. And also see “What If Your Child Says, I’m In The Wrong Body?” — an NPR interview with endocrinologist Norman Spack, co-founder of the Children’s Hospital Gender Management Services Clinic at Boston’s Children’s Hospital. Spack has worked with 30 transgender youth (including Nicole) and their families on the emotional and medical issues, particularly in adolescence. 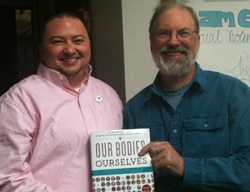 Plus: In related news this year, the Massachusetts Legislature passed and the governor signed into law the Transgender Equal Rights Bill, extending civil rights and hate crimes protections to transgender residents of that state. At left is a photo of Gunner Scott, executive director of the Massachusetts Transgender Political Coalition, an advocate of the bill, and Craig Norberg-Bohm, coordinator for the Men’s Initiative for Jane Doe.

Both men contributed to the new edition of “Our Bodies, Ourselves“; Scott’s piece, an adaptation of his remarks at the Jane Doe organization’s White Ribbon Day rally in 2010, explains how violence against transgender people is related to violence against women.

Finally, we’re looking forward to hearing more in 2012 about the forthcoming book “Trans Bodies, Trans Selves,” a resource guide for the transgender population, covering health and legal issues, along with cultural and social questions, history and theory.