During the Oscars on Sunday night, a video montage featured a number of famous actors speaking about the power of movies. Gabourey Sidibe, a break-out star who was nominated in 2010 for the Academy Award for Best Actress for her role in “Precious,” shared something quite personal:

The way I watch movies, I’m really searching for myself, because I don’t get to see enough of myself and I don’t — I kind of don’t get to like myself enough.

But if I get to see myself on screen, then I know that I exist. 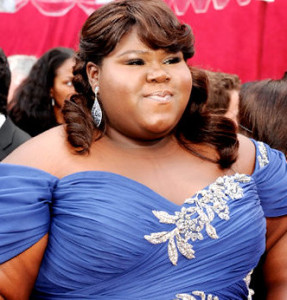 In that short statement, Sidibe (left, at the Academy Awards in 2010) revealed a great deal about representation and identity in Hollywood, which rarely includes women who don’t match a young, thin and white ideal. When young (and old) women don’t see themselves in popular culture — the lingua franca of our times — they receive the message that their lives are not as important or worthy of inclusion.

A number of organizations have been working to counter this message by focusing on girls’ inner beauty, smarts and talent. New Moon Girls Media, which publishes New Moon magazine and runs a moderated online community for girls, has launched Yes, I’m Beautiful!, a YouTube project that asks, “Why are you beautiful? What is true beauty? What would you say to someone who isn’t sure about her/his beauty?”

No matter what your age you can send your “Yes, I’m Beautiful” video to: beautynewmoon AT gmail.com. It’s a nice counterpoint to stories about young girls turning to YouTube to ask for public comment on whether they’re ugly.

Hardy Girls, Healthy Women is offering a free webinar in March and April to introduce its girl-driven media activism site, Powered By Girl (PBG), and will offer tips on using social media for youth activism.

As Rachel pointed out yesterday, the National Eating Disorders Association has launched Proud2BMe, which includes the Stamp Out Bodysnarking project to reduce bullying based on one’s appearance.

Later today, Lady Gaga and her mother, Cynthia Germanotta, will officially launch the Born This Way Foundation at a celebrity-filled event at Harvard University. The foundation will support programs and initiatives that empower youth — focusing on issues of self-confidence, well-being, anti-bullying, mentoring and career development.

Hollywood embraces diversity at a glacial pace. Fortunately these groups are ahead of the times.