Demand for newer and better devices that protect against pregnancy and sexually transmitted infections is constant — partly due to the fact that the process of development, testing and approval takes forever, and partly because what’s on the market often leaves something to be desired.

The polyurethane female condom (FC) has been available for 15 years now, and it’s gotten a lot of mixed reviews. It is the only barrier method available that is designed for female initiation, but it’s three times as expensive as a male condom, unwieldy, and can squeak during use (not sexy). Male condoms, of course, have their imperfections; loss of sensation and ill-fit are chief among the complaints.

This past December, the new and improved FC2 was recommended to the FDA for approval (see OBOB post). It should be on the market in the United States within the next year. The FC2 is made of a latex alternative, which is by all accounts a thinner, quieter, lower-cost material than polyurethane.

However, there are also other prototypes out there that are being actively tested and promoted outside of the United States, especially in Africa. In early December Jen Wilen, a program officer for Francophone Africa at the International Women’s Health Coalition (IWHC), ventured to the 15th International Conference on AIDS and STIs in Africa (ICASA) in Dakar, Senegal, where she got to check out two different prototypes for new female condoms.

One of these new condoms is the VA w.o.w. Condom Feminine (pictured left), a latex female condom made by the same company that produces the popular Inspiral male condom, which is extra roomy around the glans of the penis to increase male pleasure.

The most striking feature of the w.o.w. (worn-of-woman) FC is that it has a soft sponge where FC and FC2 has an internal ring. The sponge acts as an anchor to hold the female condom in place. The w.o.w has been available in Southern Africa since 2004 and is also available in the UK.

The second female condom (pictured right) was designed by a Seattle-based company called PATH, which has a contract to move forward with making the device available in China by 2010.

This FC is made of nitrile and has something of a parachute effect — its applicator capsule dissolves once it is inside the vagina and the FC expands to its full size.

This particular version is being tested through Family Health International — the packaging warns that it is “limited by law to investigational use only. This product may fail during use and must not be relied upon for contraception or sexually transmitted disease prevention.”

One of IWHC’s partners, Society for Women Against AIDS in Africa, Cameroun Chapter (SWAAC), has been a major advocate for the female condom. They regularly host sexuality education sessions — some in very public places (see below and here) — that teach women and men about how to use the female condom. 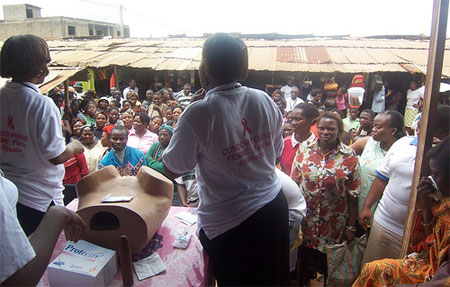 Audacia Ray is program officer for online communications and campaigns at the International Women’s Health Coalition.