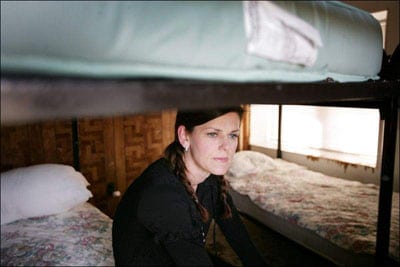 I am an award-winning interior decorator and mother to four children whose mission is to give hope to “at risk” women and children. Transforming the shelters that save people’s lives into beautiful sanctuaries that heal their spirit.

For my mother, making a home where her children felt safe and their spirits could soar was just as important as keeping them fed and clothed. Improving and decorating our modest home expressed  love for her family.  Through her example, I learned to envision possibilities, creatively shape environments, and the value of hard work involved in transformations.

From that seed came a love for decorating which began with family and friends, blossomed into a thriving business called Terry’s Enchanted Cottage, and ultimately became Enchanted Makeovers, an organization that changes shelters for women and children into places of peace and possibilities.  (Not just where basic needs are met, but spiritual needs for hope and beauty also).

The journey began in January of 2007, when the coordinator of a fund-raising event for a local shelter expressed that he would be grateful if I would agree to paint even a single wall.  As I viewed the depressing conditions, old prison beds, mold, decrepit paneling, the dingy, sad-looking area where women and children came to escape from domestic violence, or stayed to deal with drug addictions, I found my calling.  I vowed to create a space for those women and children that would revive their broken spirits and help them heal.

Operating from the belief that our environment affects the way we feel about ourselves, how we see the world, and our place in it, I undertook a two year transformation of Grace Centers of Hope Women’s Shelter in Pontiac, Michigan. Armed with vision and belief that we can act to make our dreams reality, family, friends and community volunteers were recruited and organized to transform the shelter’s bedrooms.  Donations of money and goods were solicited. Professional contractors and painters were invited to participate.

An extreme makeover replaced rooms of drab paneling, mismatched bedding and dreary, institutional colors, and in its place,  a bright, cheerful, caring space emerged, punctuated by positive affirmations and items meant to inspire faith, and belief in the power to make dreams a reality. To emphasize the connection between transforming your environment and changing your life, a motivational speaker conducted a workshop to encourage the shelter’s women to create their own vision of the future, how they would like to transform their own lives into something beautiful.

The work continues as we build a network of volunteers and donors nationwide. We have already begun work on our next “extreme makeover,” benefiting abused girls in our community. We are visibly demonstrating that people care, showing the girls they are worthy of something better than what they’ve had, creating a lasting lesson that transformations are possible, and that beauty can rise from ashes.