First in a series on egg donors and the egg donation process.

Recently, a former co-worker and his romantic partner sent me a text message that left me reeling.

It essentially read: Hey, can I have ur eggs? Thx.

Few couples would be better equipped to raise a well-loved child than these two men, and I fully supported their decision to start a family. But I wondered how we had arrived at the point where this request has become so casual that it can be communicated in fewer than 140 characters. At least take me out to dinner.

I don’t fault my co-worker; his question mirrors how the issue is presented in our culture. As a woman in her early 20s, I am bombarded by advertisements seeking my eggs.

Recently when I was riding the T in Boston, I found myself staring at the face of a smiling baby, and a dollar amount. It seems, well, easy.

Egg donation payments range anywhere from $5,000 to $10,000; some solicitations offer amounts as high as $20,000, or even $100,000, for donors with specific characteristics. I could definitely benefit from thousands of dollars, and hey, I probably have eggs to spare, right?

These attractive compensation offers lack any balancing information about risks and hazards, creating a deus ex machina temptation: As far as I know, I have the potential to help create life for a deserving future parent — and make a staggering profit. 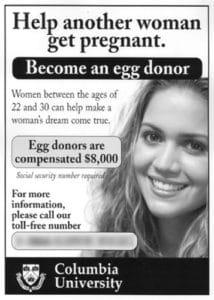 These two potential outcomes are, in fact, quite possible. It can be life-changing and rewarding to help others realize their dream of having children. The sky-high payment — sky-high, at least, to many college students, the prime demographic — is just gravy in this scenario.

But in a different light, it can be a bit like putting a price on the creation of life. Or, tilt again, and it’s simply reimbursement for the donor’s time, as well as the physical risk and discomfort.

So I dug a little deeper, and what I found is while the perspective may shift, there are some immutable realities that are rarely included in donor discussions.

Unlike the process men undergo to donate sperm, the preparation and procedure involved in egg donation require a longer-term commitment — a woman’s body is hormonally altered through the process, and she undergoes surgery.

I’d like to see ads note that fact, along with the risks of egg donation. The ads don’t mention ovarian hyperstimulation syndrome (OHSS), a condition that causes the ovaries to swell and become painful in about one-fourth of women who use injectable fertility drugs. (OHSS generally goes away after a week or so, but in severe cases it can cause rapid weight gain, abdominal pain, vomiting and shortness of breath.)

Nor do they mention that the surgery to remove the eggs can sometimes lead to complications, including cramping, bleeding and infection.

Egg donors also need to be told that the long-term risks of egg donation remain largely unknown. There is little long-term safety data on the infertility drugs commonly used to stimulate egg production, and there have been no follow-up studies on women who have donated their eggs.

This lack of safety information has led Our Bodies Ourselves and other women’s health advocates to call for a mandatory egg donor registry that will allow researchers to track the long-term health of women who have donated eggs. The Infertility Family Research Registry, a voluntary registry, is based at the Dartmouth Hitchcock Medical Center (see below for more more information).

In addition to physical risks, there are the possible psychological reactions to consider. While donors generally undergo both physical and psychological testing before the process begins, it is impossible for donors to predict with certainty the emotional impact of this procedure.

A 2008 study on egg donors’ experiences published in Fertility and Sterility found that almost one in five women reported lasting psychological effects, some positive and some negative, including “concern for and/or attachment to their eggs and/or potential offspring, concern that the donor or resultant child might want a relationship with them in the future” and “stress resulting from the donation process as a whole.”

As a member of the target demographic, I want complete and balanced information. With the prospect of such a permanent and life-altering decision, I need to know the risks and rewards.

Other women do, too. Three women who donated their eggs have begun collecting personal stories from fellow donors with the hope of creating a self-advocacy group.

“Some of us consider egg donation to be the best thing we’ve ever done. Others do not feel that way at all. Whatever her stance, each donor’s story is welcome here,” they write in the mission statement at WeAreEggDonors.com.

I personally decided against donating my eggs. I sympathized with the overwhelming process my former co-worker and his partner were experiencing, but I told them that I personally did not feel that egg donation was the right choice for me.

I knew very little about egg donation back then, but I did know enough not to match his casual request, delivered via text, with a casual promise that might worry me for years to come.

Plus: OBOS is actively encouraging infertility clinics and centers across the country to promote awareness of the Infertility Family Research Registry based at the Dartmouth Hitchcock Medical Center. Learn more about ongoing studies.

A Boston College alumna, Ryann Summers served for two years as a bilingual program advocate at Voices Against Violence, providing counseling and advocacy services to Spanish-speaking survivors of domestic violence. As an undergraduate, she founded and facilitated a support group for student survivors of sexual assault. An avid yogi and writer, Ryann aims to explore women’s public health themes regularly for OBOS.