Overlooking Evidence: “When it comes to breast cancer, why is it so hard to get the most influential media to pay attention to the possibility that, in addition to better-understood risks, unnatural substances entering women’s bodies might also be a factor?” That’s the million-dollar question in this Fair! analysis on the surprising dearth of news coverage on environmental hazards and breast cancer. An excellent report by Miranda Spencer.

Skimping on Care: More than a third of people surveyed have skipped medical check-ups or dental visits over the past year due to concern over health care costs, and 27 percent have put off getting needed health care, according to the Kaiser Family Foundation’s first health care tracking poll of 2009.

Supreme Court: No Legal Shield in Drug Labeling: The Supreme Court on Wednesday ruled that people injured by drugs can sue the drug manufacturer in state courts, even if the drugs were approved by the Food and Drug Administration.

“The ruling could have significant implications beyond drug manufacturing,” writes Adam Liptak at The New York Times. “Many companies have sought tighter federal regulation in recent years in part to shield themselves from litigation.”

The case involved a Vermont woman, a musician, whose arm had to be amputated following an injection of the anti-nausea drug Phenergan. Levine sued the drug maker Wyeth because Wyeth had not changed the label indicating that one method of administering the drug had a small risk of error which caused irreversible gangrene. Nina Totenberg did a good report on the ruling. The NPR link also includes excerpts from the oral arguments heard last November.

Sunshine State Keeps Teens in the Dark: The Healthy Teens Campaign of Florida and the Sexuality Information and Education Council of the United States (SIECUS) have released a report on failed abstinence-only sex education programs in Florida’s public schools: “Sex Education in the Sunshine State: How Abstinence-Only-Until-Marriage Programs Are Keeping Florida’s Youth in the Dark.”

“[O]ur research has exposed both the state’s appalling indicators of poor outcomes for young people and the equally appalling nature of how abstinence-only-until-marriage programs have become pervasive throughout the state,” writes Adrienne Kimmell at RH Reality Check.

Him/Her/They: Elizabeth Landau at CNN reports on the history of the search for gender-neutral pronouns, an issue that has recently been taken up on Twitter. An interesting story.

On the Issues: Good reads in the On the Issues Magazine cafe, including Diana Whitten‘s look at Women on Waves, a Dutch organization that provides on-ship abortions in international waters for women from countries where it is illegal. Women on Waves recently won an important victory in the European Court of Human Rights. And don’t forget to check out the winter issue, which features stories on topics from ratifying CEDAW to Second Life.

Plus: Emily Douglas points to this Albany Times Union op-ed on the implications of a possible merger between two secular hospitals and one religious hospital in Rensselaer County, New York. The merger raises questions about reproductive health care for patients and employee health insurance benefits, since Catholic directives prohibit coverage for contraception.

In Translation: Over at Sociological Images, a blog sponsored by the American Sociological Association, there’s been some debate over the English and Spanish versions of a pamphlet for pregnant women offered by Kaiser Permanente. Kaiser provides a response.

The Economic Future and Women’s Roles: The Chicago Foundation for Women looks at how the stimulus package affects women’s economic security.

Teaching Domestic Violence Victims Safe Use of Technology: Via this press release, I learned about a Washington state program designed to help victims of domestic violence by increasing their knowledge of how to use technology safely.

“Domestic violence is built around control, not anger, and an abusive partner often limits a woman’s access to information and support. Monitoring computer activity is one of many ways to control a spouse,” said Jerry Finn, a University of Washington Tacoma professor of social work who also evaluates the effectiveness of human services programs.

The training covers how to prevent such things as identity theft; concealing browser history; how to be safe in a chat room; how to set up an e-mail account without using a real name; and how to prevent being followed with a GPS device. What a smart idea. 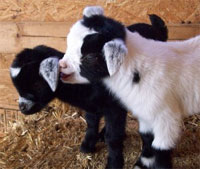 Welcome Particle, Wave, Astarte and …: To apologize for the late Double Dose, I offer some cute overload, via feminist poet and performance artist Diana Tigerlily, who also raises goats.

Meet the newest ones — five in all, if my counting is correct. Makes me think two dogs and two cats may not be enough : )