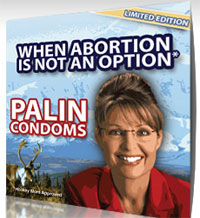 Always Carry Protection: Lucinda Marshall has the goods on the Palin condom.

Donations poured in after an anonymous email was circulated urging donations in any amount and recommending that the personalized thank-you card from Planned Parenthood be sent to Palin at the McCain-Palin campaign headquarters in Virginia.

L.A. Times columnist Patt Morrison took credit for the fundraising, recalling how she first made a similar suggestion after President Bush took office in January 2001.

Every donation generated a “thank you card.” I envisioned a scene out of “Miracle on 34th Street,” sacks and sacks of thank-you cards from Planned Parenthood, delivered to Bush in the Oval Office.

It worked. Boy, did it. Ultimately, more than a million dollars, I was told, was generated for Planned Parenthood in Bush’s name. George Bush became one of the biggest money-generators in Planned Parenthood’s history. The idea won me an award from Planned Parenthood, and a splash in Ms. Magazine. So I am delighted that my ”Mother of All Ironic Donations” notion has been revived for Palin.

Jenny McCarthy v. Amanda Peet: Nothing like turning a disagreement over the safety of vaccines into a male fantasy. Seriously, why/how did this get published?

People living in Chicago and nearby suburbs face some of the highest risks in the nation for cancer, lung disease and other health problems linked to toxic chemicals pouring from industry smokestacks, according to a Tribune analysis of federal data.

The U.S. Environmental Protection Agency spent millions of dollars to assess the dangers that air pollution poses but has failed to fulfill promises to make the research more accessible to the public. So the Tribune is posting the information on its Web site, where users can easily find nearby polluters and the chemicals going into their air.

Those who look up Cook County will see it ranked worst in the nation for dangerous air pollution, based on 2005 data. The Tribune also found Chicago was among the 10 worst cities in the U.S.

Plus: The Trib also published a searchable database of health-risk information (based on the EPA’s Risk-Screening Environmental Indicators (RSEI) database) and the health effects of long-term exposure to various industry-produced chemicals.

Bioethicists Challenge Reticence to Include Pregnant Women in Medical Research: A paper to be posted online and later in print in the November edition of the International Journal of Feminist Approaches to Bioethics (IJFAB) argues why more pregnant women must be included in medical research.

“As a society we are ethically obliged to confront the complex challenges of pregnant women in research, otherwise we relegate all expectant mothers to second-class medical citizens,” said Ruth Faden, director of the Johns Hopkins Berman Institute of Bioethics, in this press release about the journal article.

“One of the key messages of this paper is that progress will not happen until we shift the burden of justification from inclusion to exclusion and to an explicit commitment to studying the effects of drugs in pregnancy,” Faden added.

The AMA wants to bar licensing to certified professional midwives, who specialize in out-of-hospital births (births at home and in birthing centers) and is backing state legislation that restricts licensing to nurse midwives who have additional nursing training and certification required to work in hospitals.

“Certified professional midwives are a critical component to meet the growing maternal health needs in the black community,” said Monroe, noting that every sort of midwife is needed to reduce maternal morality rates among African American women.

Read more about the history of black midwives at the International Center for Traditional Childbirth. Here’s the description of the conference (PDF), which takes place in Harlem.

Top Psychiatrist Didn’t Report Drug Makers’ Pay:  “One of the nation’s most influential psychiatrists earned more than $2.8 million in consulting arrangements with drug makers from 2000 to 2007, failed to report at least $1.2 million of that income to his university and violated federal research rules, according to documents provided to Congressional investigators,” reports Gardiner Harris in The New York Times. “The psychiatrist, Dr. Charles B. Nemeroff of Emory University, is the most prominent figure to date in a series of disclosures that is shaking the world of academic medicine and seems likely to force broad changes in the relationships between doctors and drug makers.”

Cancer Research Briefing: Bloggers recently had a chance to discuss the current state of cancer research and biotechnology with Dr. Gil G. Mor, an associate professor at Yale Medical School and director of Reproductive Immunology and Translational Research in Gynecologic Oncology, and Lori Lober, who was diagnosed with stage IV breast cancer in 2000 and has maintained a diagnosis of “no evidence of disease” for five years.

Treating Vascular Disease in Women: Arterial vascular disease is underdiagnosed and undertreated in older women, according to studies. Earlier this year, medical experts met to discuss the differences between men and women when it comes to the prevention, diagnosis and treatment of vascular diseases such as heart attacks and strokes. Out of that symposium came newly released recommendations for improving research on sex differences.

Losing the Weight Stigma: The Idea Lab section of The New York Times Sunday Magazine questions the “war on fat” and offers examples of how academics and activists are emphasizing health over weight. Robin Marantz Henig writes:

This is a core argument of fat acceptance: that it’s possible to be healthy no matter how fat you are and that weight loss as a goal is futile, unnecessary and counterproductive — and that fatness is nobody’s business but your own.

Many fat-acceptance activists prefer a new approach to dieting that focuses on nutrition, exercise and body image. A new book out this fall, “Health at Every Size,” by Linda Bacon, a nutritionist and physiologist at the University of California at Davis, outlines this approach, which is less about dieting than a lifestyle change that emphasizes “intuitive eating”: listening to hunger signals, eating when you’re hungry, choosing nutritious food over junk. It encourages exercise, but for its emotional and physical benefits, not as a way to lose weight. It advocates tossing out the bathroom scale and loving your body no matter what it weighs.

The philosophy is migrating slowly into mainstream programs, like a spa in Vermont that focuses on “acceptance of ourselves and our wonderful sizes.” But the spas and other programs have trouble with the bottom line of fat acceptance — rejection of weight loss as a goal. Weight Watchers, for instance, uses some of the same slogans, and while it promotes its program as “not a diet,” it still tracks weight loss down to the decimal point.