NOW’s Future: The 2009 National NOW Conference kicks off June 19 in Indianapolis. At issue is who will replace current NOW President Kim Gandy, who is stepping down after eight years: Latifa Lyles, a 33-year-old black woman who has been one of Gandy’s three vice presidents, or Terry O’Neill, 56, a white activist who was NOW’s vice president for membership from 2001 to 2005.

Feministing’s Jessica Valenti is quoted in this Associated Press story on the election and NOW’s generational divide.

Plus: I don’t think I’ve linked yet to Katha Pollitt’s excellent piece in The Nation on feminism’s false waves. It begins:

Can we please stop talking about feminism as if it is mothers and daughters fighting about clothes? Second wave: you’re going out in that? Third wave: just drink your herbal tea and leave me alone! Media commentators love to reduce everything about women to catfights about sex, so it’s not surprising that this belittling and historically inaccurate way of looking at the women’s movement — angry prudes versus drunken sluts — has recently taken on new life, including among feminists.

Losing Celebrity Weight Battles: When famous dieters like Kirstie Alley or Oprah Winfrey talk about being “disgusted” with their bodies, the comments have an effect beyond selling magazines.

“Kirstie looks the same as me, to the inch, height and weight,” Emily Schaibly Greene, 29, recently told The New York Times. “It took me a long time to get there, but I’m feeling good with how I look. But it’s difficult to keep liking the way I look when I’m reading that it’s gross.”

Lesley Kinzel, who writes for the blog Fatshionista, said, “When you have famous people turning their weight tribulations into mass-media extravaganzas, they’re contributing to a culture where passing comments on strangers’ bodies is considered O.K.” 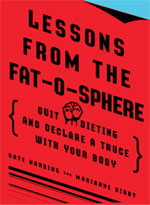 Plus: Nia Vardalos, who rose to fame after starring in “My Big Fat Greek Wedding,” says her recent weight loss is all people want to talk about these days, pushing aside her personal and professional achievements. Her column is awesome.

And if you haven’t yet bought “Lessons From the Fat-O-Sphere,” go. Author Kate Harding — founder of Shapely Prose and contributor to Broadsheet — is still on the book tour this month and is looking forward to speaking at colleges in the fall.

Summer Reading List: From Women’s eNews: From sensational memoirs to serious sociology, check out what women are writing about and the prizes they’ve been snapping up so far in 2009. Sarah Seltzer has the goods.

Women’s Health Clinic to Close: The University of Chicago Medical Center is closing its women’s health clinic, an essential community health resource, at the end of the month. Ironically, this is being done under the Medical Center’s Urban Health Initiative; U.S. Rep. Bobby Rush has called for a congressional investigation into whether the Medical Center has engaged in “patient dumping” by steering the poor to other health facilities.

“Medical center executives have said the steep downturn in the economy has forced them to trim $100 million from the hospital’s budget to maintain running a prestigious hospital, research center and medical school. They also have said the Women’s Health Center, which cares for thousands of Medicaid patients, is a money loser,” reported the Chicago Tribune last month, in a story on protests against the closing.

Plus: While looking up information about the closing, I came across a 2008 New York Times story on Michelle Obama, who at that time was on leave from her job as vice president of community affairs at the University of Chicago Medical Center. Stories like this made me wonder what she could/would have done about the closing:

Obama stopped that. The prospect of white doctors performing a trial with black teenage girls summoned the specter of the Tuskegee syphilis experiment of the mid-20th century, when white doctors let hundreds of black men go untreated to study the disease.

Too Poor to Make the News: Over on The New York Times op-ed page, Barbara Ehrenreich has written the first in a series on how the recession affects people who don’t neatly fit the downwardly mobile narrative: the already poor.

“This demographic, the working poor, have already been living in an economic depression of their own,” writes Ehrenreich. “From their point of view ‘the economy,’ as a shared condition, is a fiction.” She continues:

The deprivations of the formerly affluent Nouveau Poor are real enough, but the situation of the already poor suggests that they do not necessarily presage a greener, more harmonious future with a flatter distribution of wealth. There are no data yet on the effects of the recession on measures of inequality, but historically the effect of downturns is to increase, not decrease, class polarization.

The recession of the ’80s transformed the working class into the working poor, as manufacturing jobs fled to the third world, forcing American workers into the low-paying service and retail sector. The current recession is knocking the working poor down another notch — from low-wage employment and inadequate housing toward erratic employment and no housing at all. Comfortable people have long imagined that American poverty is far more luxurious than the third world variety, but the difference is rapidly narrowing. 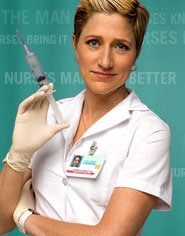 Health Care & the Arts: NPR interviews Anna Deveare Smith about her show “Let Me Down Easy,” which is based on interviews with doctors and patients (previously discussed here). Her newest role: artist in residence at the Center for American Progress, which Smith will use as a perch for studying changes in Washington. Smith also plays a doctor in the new Showtime series “Nurse Jackie.”

Speaking of “Nurse Jackie,” David Bauder of the Associated Press notes that the ethically challenged nurse at the head of the show (wonderfully played by Edie Falco) has appalled some nurses — but is that a bad thing for Showtime? Well, no.

Apologies from California: I meant to post this next one when it first came out, but I still think it’s amusing — San Francisco Chronicle columnist Mark Morford would like you to know California is really, really sorry about the whole Prop 8 thing.

Meanwhile, tony Greenwich, Conn., has become wedding central for same-sex New York couples who no longer have to drive as far as Massachussetts. California sure could have used money spent on wedding bliss.