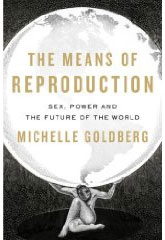 Reading List: Anna Clark interviews Michelle Goldberg, author of “The Means of Reproduction: Sex, Power, and the Future of the World,” at Bitch magazine (and happy birthday to Anna’s blog, Isak!).

Kathryn Joyce, author of “Quiverfull: Inside the Christian Patriarchy Movement,”  talks with Religion Dispatches. An excerpt of her book can be read here.

Plus: Mark Bittman on eating healthy, organic or not.

Dealing with the Recession: Over at Writes Like She Talks, Jill Miller Zimon put together a list of articles that provide perspective on the recession, job loss and the economic impact on women. At Women’s eNews, Mimi Abramovitz explains three new rules about jobless benefits in the stimulus package that will help women and correct a major gender bias.

Pregnant? Here’s a Pink Slip: “Last year the number of pregnancy-based discrimination charges filed with the E.E.O.C. was up nearly 50 percent from a decade earlier, to a total of 6,285. That number seems likely to rise even higher this year,” writes Lesley Alerman in The New York Times.

“Some employers are using the economy as a pretense for laying off just one person,” said Elizabeth Grossman, a lawyer for the Equal Employment Opportunity Commission. “And very often that person is pregnant or the oldest employee on staff. The economy may be the legitimate cause — or there may be discrimination.”

Tenn. Senate Passes Abortion Amendment: The Tennessee Senate passed a constitutional amendment that states in part, “nothing in Constitution of Tennessee secures or protects right to abortion or requires the funding of an abortion.”

Rachel writes: “Supporters keep insisting that the bill does not make abortion illegal, while not addressing the fact that if this ultimately succeeds (there are several more steps for this Constitutional amendment), it makes room for the numerous restrictions often supported by anti-choice folks — such as waiting periods, forced ultrasounds, required ‘informed consent’ scripts that are not medically accurate, and so on. It also makes room for an abortion ban in the event that national protections vanish.”

Meanwhile, “Illinois could be on the verge of passing one of the most progressive reproductive health bills, the Reproductive Health and Access Act, any state has seen in a long time,” writes Veronica Arreoloa. Here are the groups supporting  the bill. If you’re a resident of Illinois, contact your legislator and voice your support.

Cost of Domestic Abuse: Women who are abused by their partners spent 42 percent more on healthcare per year than non-abused women, according to a long-term study of more than 3,000 women published online in the journal Health Services Research.  The study, summarized in this press release, also found that the increased costs don’t end when the abuse does. Women who suffered physical abuse five or more years earlier still spent 19 percent more per year on health care than women who were never abused.

Facts of Life: Sarah Seltzer praises “the sex talk” on one of my favorite television shows, “Friday Night Lights,” and compares it to a conversation from over a decade ago on “My So-Called Life.”